South Africa, Chile, Colombia, and Portugal interested in the KC-390.
its can replace the C-130 as per experts and an ambitious project 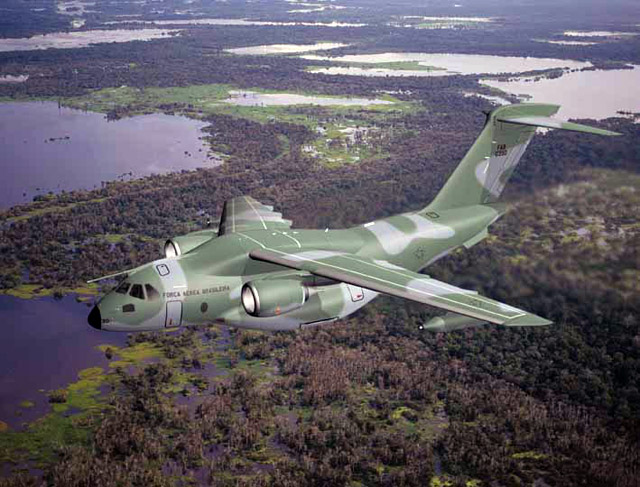 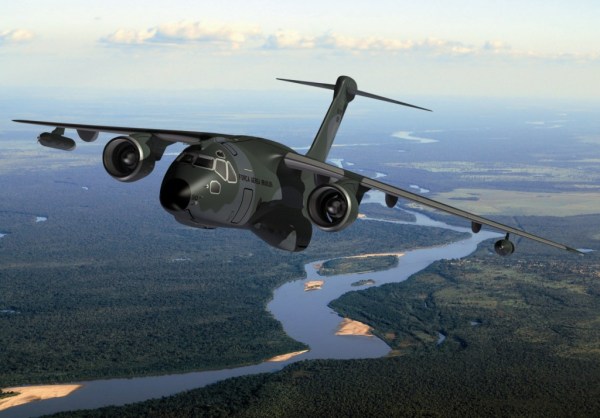 hmm it will give serious competition to the Il-214

If Rafale wins, Dassault will aid Embraer in its construction and France will place the first export order from 12-14 aircraft.

Sweden too promised to place orders for this big bird if Gripen wins the competition and the orders will be in the number above 20
Last edited: Apr 11, 2010

The final body join of the first KC-390 will take place at Embraer's test facility near Araraquara, Brazil, following delivery of the Aero Vodochody-built aft fuselage via an Antonov An-124. [highlight]Photo credit: Embraer/Promotion[/highlight]


Embraer will begin final assembly of the first KC-390 multirole tanker transport at the end of April, marking a major milestone in the Brazilian company's ambitious plans to diversify into the military airlifter market. The fuselage, empennage and wing sections of the first aircraft are being completed prior to assembly at a specially built production site at Gaviao Peixoto, Embraer's extensive test facility near Araraquara in south-central Brazil. The final body join, expected to take around three weeks, starts the clock ticking on a fast-paced development-and- test program, which is set to begin with first flight at the end of this year and culminate in entry into service with the Brazilian air force (Forca Aerea Brasileira-FAB) in 2016. The twin turbofan-powered airlifter was launched in 2009 when the Brazilian government signed a development contract with Embraer. "Negotiations are ongoing" to convert a letter of intent from the FAB for 28 aircraft into a firm production contract, says Fernando Fialho, KC-390 program strategy manager. The company, which is building the initial two KC-390 prototypes under a firm contract, expects negotiations to be completed in coming months.

its can replace the C-130 as per experts and an ambitious project
Click to expand...

Embraer has moved the wing and sponsons of the first KC-390 into place on the assembly line, the Brazilian manufacturer has revealed. The company's third photo update of the tanker-transport posted online shows the programme continues to make progress, but it still has much work to do before a scheduled first flight by year-end.

The latest picture, released on 23 September, is framed in such a way that it obscures any view of the aft fuselage, so it is not clear whether the aircraft's vertical and horizontal stabilisers have been integrated. Although International Aero Engines delivered the V2500-E5 turbofans for the aircraft in August, the picture shows that they have not yet been installed under the wings. Embraer also has yet to install the radome, the windows for the flightdeck and panel coverings over the forward avionics component. The release of the photo on 23 September follows an emerging pattern. Embraer released its first picture of an unpainted, wingless fuselage on the assembly line on 22 May. This was followed two months later with a new photo showing a painted fuselage with landing gear attached, but still wingless and tailless. Embraer has revealed a 25 October target to conduct the roll- out of the KC-390, which is scheduled to achieve first flight by year-end and certification in the first half of 2016. The Brazilian air force has ordered 28 of the type, and the project has also attracted commitments from five more countries to potentially order another 32.
PICTURE: First KC-390 gets wings on assembly line - 9/24/2014 - Flight Global
L

A simple user of DFI

this can only be a dream!!!
:ranger:
I hope that Brazil has the money for buy this KC-390 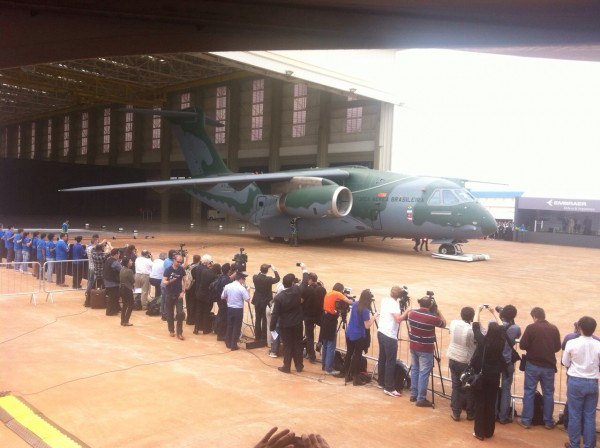 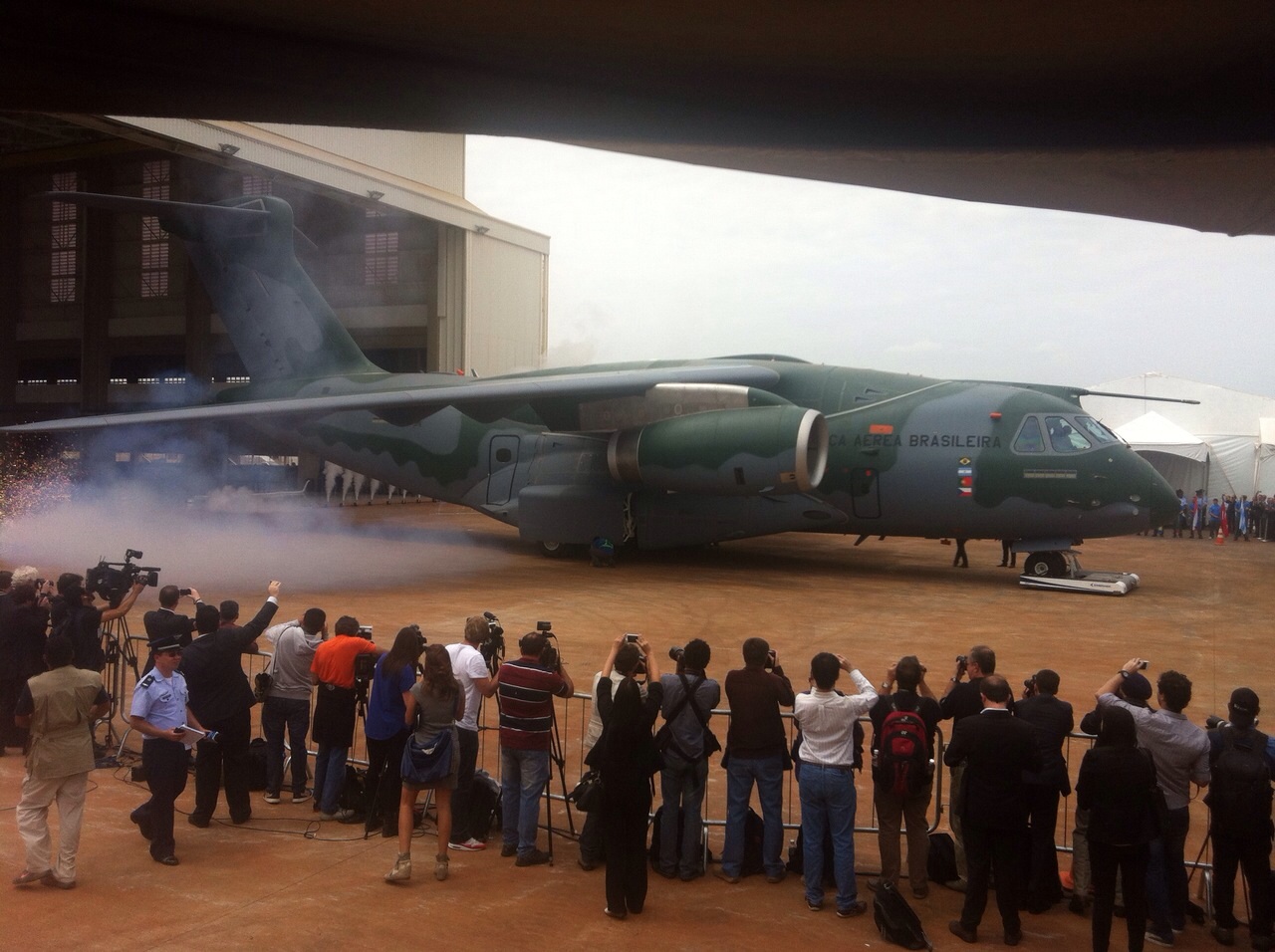 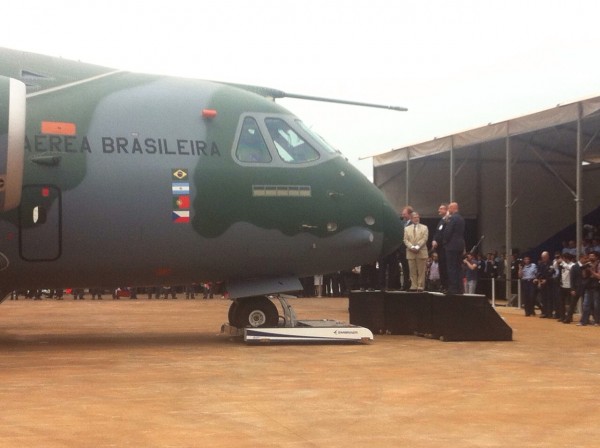 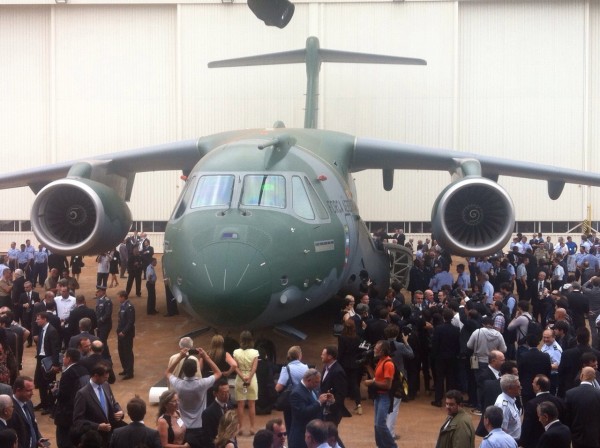 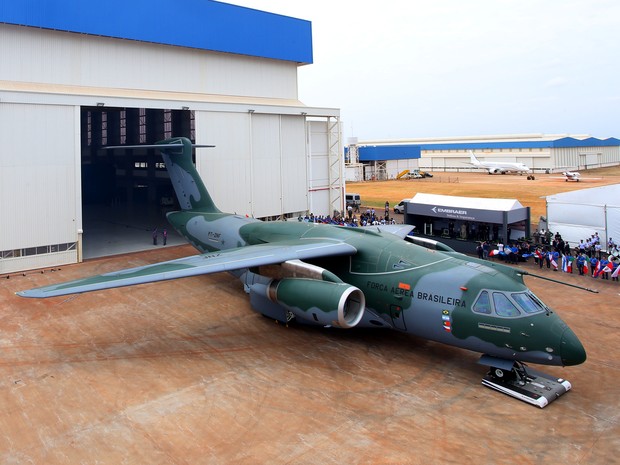 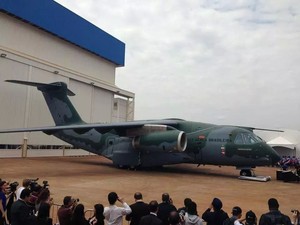 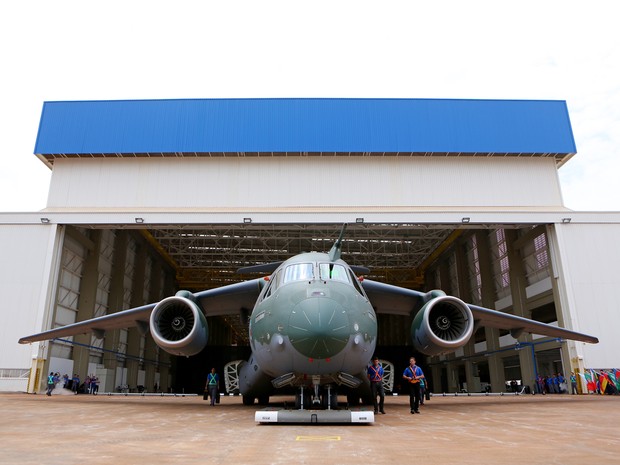 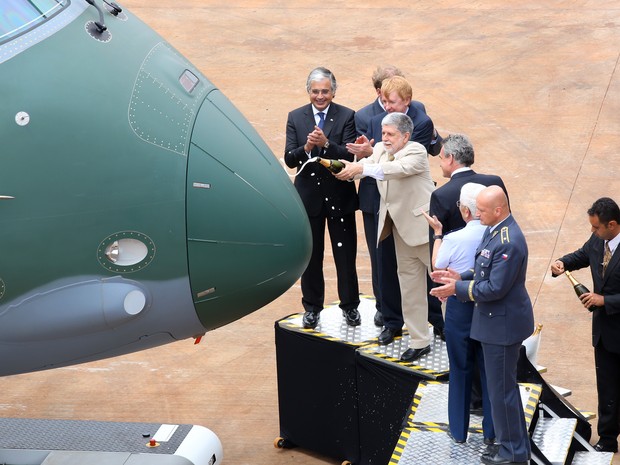 Embraer and the Brazilian Air Force (FAB) are to formally roll out the first prototype of the KC-390 military transport aircraft, on October 21[1]. The ceremony is set to take place at the GaviÃ£o Peixoto facility, in the State of SÃ£o Paulo, where the model is being produced. The agreement between the FAB and the Brazilian aircraft manufacturer arranges for the acquisition of 28 aircrafts over a period of ten years, with the first delivery scheduled for 2016.

The Coordinating Committee of the Combat Aircraft Program (COPAC) within the Department of Aerospace Science and Technology (DCTA) is responsible for conducting the project. "The KC-390 represents, for the Brazilian Air Force and our national industry, the peak, the culmination of our capacity to issue requirements and especially the capacity of our national aerospace industry to develop a next-generation product", declared Air Brigadier JosÃ© Augusto Crepaldi Affonso, President of the COPAC[2].

The total investment sums up to R$ 12.1 billion (the Brazilian Real is the currency of Brazil, and its present value is 1 R = 0.31 EUR[3]) out of which R$ 4.9 billion are destined to the development of the aircraft and R$ 7.2 billion for the acquisition of 28 units, informs the Brazilian Air Force[4]. The KC-390 is to become the backbone of FAB's transport aviation. Versatile, the aircraft is to take on missions such as operating on small aerial runways in the Amazon, launch paratroopers, perform search operations, refuel other aircrafts in flight, landing in Antarctica and launching cargo in flight, among others.

According to FAB, the KC-390 represents the very latest in terms of avionics: the system has an intuitive interface, facilitating Man-Machine Interaction (MMI) and reducing the workload of the flight crew, thereby increasing situational awareness. The high resolution screens allow the crew to easily access the information necessary to fulfill various types of missions, and also present the advantage that they can be configured to function in the most appropriate mode for the different phases of the mission[5].

The aircraft is equipped with the fly-by-wire (FBW) system, technology that makes it possible to control the craft's movements entirely through electrical impulses, eliminating the use of cables and rods. "This electronic system, while complex, not only makes the controls more precise but also means airplanes no longer have to be fitted with the cranks, gears, pulleys and cables on which older aviation systems relied"[6].

The aircraft's maximum load capacity is 29 tons, storing up to 23.2 tons of fuel on the wings. It can transport 80 soldiers in a troop transport configuration, or 64 paratroopers, or 74 stretchers plus a medical team or additional containers, as well as armored cars and other equipment. The armored Guarani fighting vehicle and the Blackhawk helicopter, for example, could fit into the cargo bay of the KC-390.

Out of Embraer and FAB's estimate production of more than a hundred units of the KC-390s in the first decade, most of them are aimed to replace the C-130 Hercules manufactured in the United States beginning with the 50s[7]. Among the comparative advantages it presents, one of the most significant is related to speed performance: while the C-130's most recent version can reach a maximum speed of 671 km/h, the Brazilian aircraft can reach up to 850 km/h[8].

The KC-390 has thus the capacity to deploy, faster than his predecessor in the FAB, military troops and assets in Brazil and anywhere in the world within a range of 6,019 km (maximum range with no cargo) or 3,400 km (with 19 tons of cargo).

According to AgÃªncia ForÃ§a AÃ©rea, Argentina, Chile, Colombia, Portugal and the Czech Republic have already confirmed their intention to purchase the aircraft[9]. Once the assembly line is active, Embraer is expected to generate more than 12.000 direct and indirect jobs.

The new military transport airplane produced by Brazil significantly enhances the tactical, operational and strategic airlift capabilities of this large regional power, clearly prepared – and clearly wishing – to play a more and more prominent role on the trans-regional arena.

GAVIAO PEIXOTO, Brazil, Oct. 21, 2014 /PRNewswire/ --Today Embraer rolled out the first prototype of the KC-390 military transport from the production hangar at the industrial plant of Gaviao Peixoto, Brazil. The event was attended by the Brazilian Minister of Defense, Celso Amorim, the Commander of the Brazilian Air Force, Lieutenant-Brigadier General Juniti Saito, and delegations and representatives from more than 30 countries. This milestone rollout will allow the Company to perform important ground tests prior to the aircraft's first flight, planned to take place by the end of this year.

"This significant milestone of the KC-390 Program demonstrates Embraer's ability to manage such a complex and high-technology project and to perform it on track," said Jackson Schneider, President and CEO, Embraer Defense & Security. "It paves the way for the beginning of the ground tests to prepare for the first flight."

"The KC-390 will be the backbone of the FAB's air transportation network. It will be able to operate in both the Amazon and Antarctica. The jet engines give the aircraft enormous agility in fulfilling all of its missions, faster and better," stated Aeronautics Commander, Lieutenant-Brigadier General Juniti Saito.

Following the rollout, the aircraft will continue with initial systems evaluations leading to the first engine run, and then to the ground vibration tests and the other planned ground tests. This aircraft is the first of two prototypes that will be used in the development, ground, flight and certification test campaigns.

The KC-390 is a joint project of the Brazilian Air Force with Embraer to develop and produce a tactical military transport and aerial refueling airplane that is a significant advance in terms of technology and innovation for the Brazilian aeronautics industry. The aircraft is designed to establish new standards in its category, with a lower operating cost and the flexibility to perform a variety of missions: cargo and troop transport, troop and cargo air delivery, aerial refueling, search and rescue, and combating forest fires, among others.

Meanwhile Russia and India are still only talking about MTA . Hopefully that damn deal will get signed during aero India .
S

Why not military as well? This is a golden opportunity to stop buying C-130s and move towards KC-390s in the future. It is a logistical nightmare but we need reliable suppliers. Joining Brazil would have been beneficial for us as neither Russia nor US would be ruffled and we would have a platform with a fellow BRICS country to increase our partnership.