Mr Morales said the development of nuclear technology for peaceful purposes has become a strategic priority for his country.

Speaking to members of the Bolivian Congress, he said that Iran, France and Argentina had volunteered to help with the development of the project.

Brazil, Argentina and Mexico began their nuclear programmes in the 1970s.

"Bolivia cannot remain excluded from this technology, which belongs to all humankind," Mr Morales said in his annual state of the union address in La Paz.

"We have decided to create a high-level energy commission. This is a priority of the Bolivian state," he said.

Mr Morales, an outspoken critic of the United States policies in the region, is running for re-election in October.

Last month, Bolivians gathered in the central square in La Paz to cheer the launch of Bolivia's first telecommunications satellite.

President Morales, who went to China for the launch, said it would end Bolivia's dependence on foreign powers for its communications.

The satellite is named Tupak Katari, after an indigenous hero who fought Spanish colonial rule.

Good. I think Latin America needs economic and infrastructure boost. more electricity will also boost industries, and can be a good outsourcing hub for the US, and still be in a comfortable time zone.

Is Bolivia Going Nuclear?
Earlier this week, President Evo Morales announced plans to build a nuclear reactor with the help of Iran. The only question: Why?

Maybe it's the rarefied air over the Andes or the pull of Pachamama, the Incan version of Mother Earth, but the authorities in Bolivia these days seem to have some awfully ambitious plans. 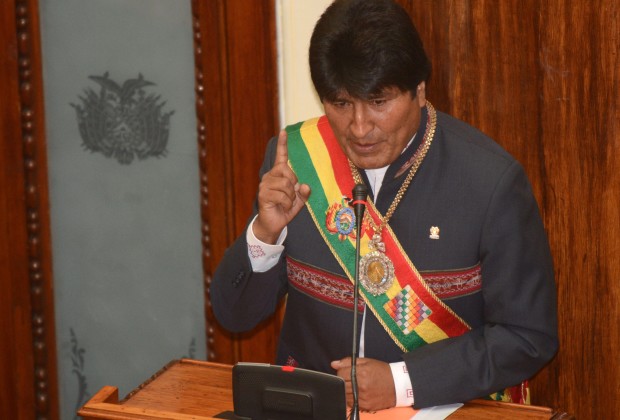 Case in point: Earlier this week, President Evo Morales announced his goal to build a nuclear reactor with the help of Iran. Morales dropped the bomb in his state of the union address to the Bolivian legislature, adding a dramatic flourish to the 11th anniversary of his presidency. "Bolivia cannot be left on the sidelines of [nuclear] technology," he said, calling the peaceful employment of atomic energy a "strategic priority."

It's not the first time Morales has made a brazen move. Last year, for instance, he capped off a trip to Moscow with the idea of extending asylum to Edward Snowden. He didn't follow through, but wound up triggering an international manhunt for the fugitive American thought to be hiding on Morales' presidential plane. In 2006, he sent soldiers to take over oil refineries owned by the Brazilian oil giant Petrobras, which was a direct slap in the face to the Latin powerhouse next door. 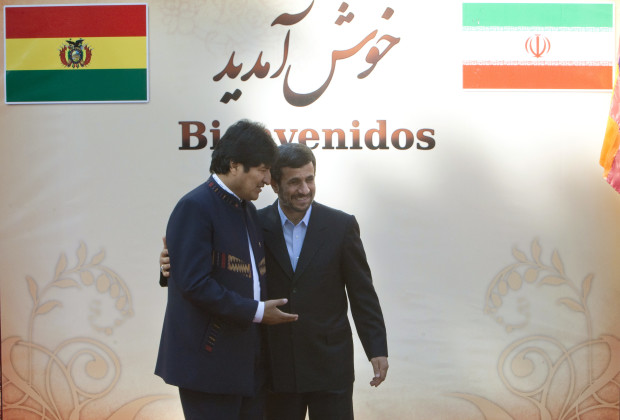 But this week's move caught even his most ardent supporters off guard. Granted, Morales had been toying with the idea for years, signing a cooperation protocol with Iran in 2010, but only recently has he made a nuclear Bolivia a national priority. "I want to tell you, we are not far from having atomic energy," he told Bolivian lawmakers. "And we have sufficient prime material, and we have the right [to nuclear technology]."

Whether any of this will come to pass is another matter. Small, landlocked and pocked by poverty, Bolivia is an unlikely candidate for an expensive commitment to nuclear energy. In Latin America, only Brazil, Mexico and Argentina have nuclear reactors, and even these economic heavyweights have struggled to bring their plants online. Nor did Morales explain why Bolivia, with no experience in nuclear energy, was looking for assistance from Iran, which has yet to launch a reactor of its own. 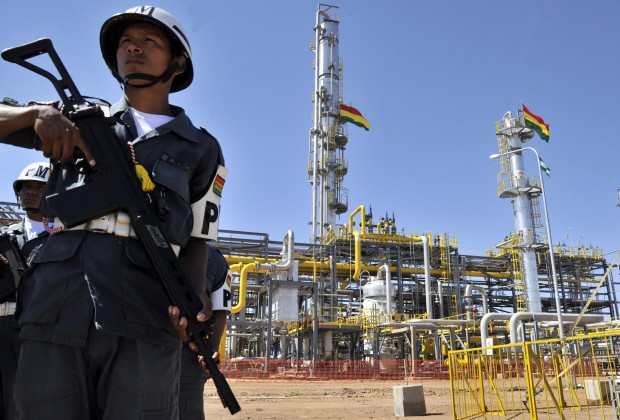 A soldier stands guard during the inauguration of a natural gas liquids separation plant in Bolivia. (AFP/Getty Images/Aizar Raldes)

Ramping up atomic energy seems to make little sense. Bolivia is sitting on a vast, undeveloped cache of resources, including Latin America's second largest natural gas reserves and a mother lode of lithium, the raw material for batteries.

The problem isn't Pachamama, it's politics. A fiery nationalist, who rarely misses a chance to rail against "gringo" capitalism, Morales has spent the last decade centralizing power and curbing private capital. Boasting this "new economic model," the Bolivian president sang the praises of state capitalism, which he said controls 34 percent of the country's economy today compared with 20 percent in 2005.

Standing up to gringo capitalists has won him applause from the mostly poor electorate, which equates foreigners with carpetbaggers (sometimes justifiably). But doing so has also chased away investors, undercutting prize state industries. Now, paradoxically, Bolivia is seeing its natural gas reserves shrink even as energy demand soars across the region.

Brazil alone looks to Bolivia for some 30 million cubic meters of natural gas a year to power industry and keep stoves burning in SÃ£o Paulo. "Bolivia's reserves have plunged since the state takeover there," says Adriano Pires, an energy analyst at the Brazilian Center for Infrastructure, an independent research outfit. "Going forward, there are real doubts as to whether Bolivia will be able to continue to supply Brazil with natural gas." 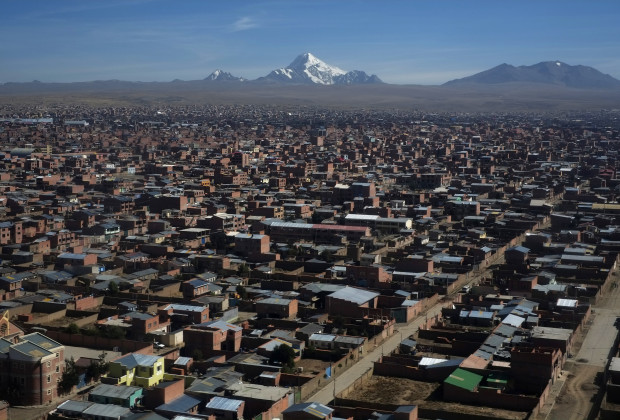 What luck will Bolivia have in generating nuclear power if it can't even keep the stoves lit? Perhaps because of the obstacles to success, Morales' nuclear ambitions have stirred little comment from the United States. Washington has come to see such posturing from La Paz as mere political spin. Bolivians will go to the polls on Oct. 5 for presidential elections, and while Morales is favored to win, he could use a lift. Though he has overseen a rare period of prosperity and a robust economy, Bolivia's foreign debt is soaring just as the prices for its leading minerals, such as tin and silver, are slipping.

The flow of wealth is key to boosting social programs, which have improved the lot of the poor but failed to close the nation's yawning gap between haves and have-nots. A recent report by the Argentina-based Center for Distributive, Labor and Social Studies at the University de la Plata showed that Bolivia surpassed Brazil last year to become the most unequal country in Latin America. More than half of Bolivia's 10 million people live in poverty, and only one in 10 of those at the bottom own a refrigerator, for instance.

"It's always convenient in an electoral environment to flex your muscles and show confidence," says Michael Shifter, president of the Intern-American Dialogue, a Latin America think tank. "While there are lots of obstacles to making it work, nuclear energy is a proxy for projecting strength and independence."