ST. LOUIS, March 8, 2010 -- The Boeing Company [NYSE: BA] has begun to build Phantom Eye -- its first unmanned, liquid-hydrogen powered, high altitude long endurance (HALE) demonstrator aircraft.
"The essence of Phantom Eye is its propulsion system," said Darryl Davis, Boeing Phantom Works president. "After five years of technology development, we are now deploying rapid prototyping to bring together an unmanned aerial vehicle [UAV] with a breakthrough liquid-hydrogen propulsion system that will be ready to fly early next year."
Phantom Eye's entire propulsion system -- including the engine, turbo chargers and engine control system -- successfully completed an 80-hour test in an altitude chamber on March 1, clearing the way for the propulsion system and UAV to be assembled.
The twin-engine Phantom Eye demonstrator will have a 150-foot wingspan and be capable of flying for more than four days at altitudes up to 65,000 feet while carrying a payload of up to 450 pounds. Phantom Eye is designed to maintain a persistent presence in the stratosphere over a specific area, while performing missions that could include intelligence, reconnaissance, surveillance and communication. Boeing also is developing a larger HALE that will stay aloft for more than 10 days and carry payloads of more than 2,000 pounds, and building "Phantom Ray," a fighter-sized UAV that will be a flying test bed for advanced technologies.
"We believe Phantom Eye and Phantom Ray represent two areas where the unmanned aerial vehicle market is heading, and rapid prototyping is the key to getting us there," said Dave Koopersmith, Advanced Boeing Military Aircraft vice president. "These innovative demonstrators reduce technology risks and set the stage for meeting both military and commercial customers' future needs."
Phantom Eye evolved from Boeing's earlier success with the piston-powered Condor that set several records for altitude and endurance in the late 1980s. Boeing, as the Phantom Eye system designer, is working closely with Ball Aerospace, Aurora Flight Sciences, Ford Motor Co. and MAHLE Powertrain to develop the demonstrator.
Phantom Ray evolved from the X-45C program. It is scheduled to make its first flight in December.
A unit of The Boeing Company, Boeing Defense, Space & Security is one of the world's largest defense, space and security businesses specializing in innovative and capabilities-driven customer solutions, and the world's largest and most versatile manufacturer of military aircraft. Headquartered in St. Louis, Boeing Defense, Space & Security is a $34 billion business with 68,000 employees worldwide.
# # #
Contact:
Chris Haddox
Boeing Phantom Works
Office: 314-234-6447
Mobile: 314-707-8891
[email protected]


as i am unable at present to embed pics or videos please follow the link this is the only picture of the phantom eye at present
http://boeing.mediaroom.com/file.php/81145/MSF10-002322_med.jpg

Boeing has unveiled its unmanned hydrogen-powered spy plane which can fly non-stop for up to four days.

The demonstrator will be shipped to Nasa's Dryden Flight Research Center in California later this summer to prepare for its first flight in early 2011.

Boeing says the aircraft could eventually carry out "persistent intelligence and surveillance".

It is a product of the company's secretive Phantom Works research and development arm.

Boeing says the aircraft is capable of long endurance flights because of its "lighter" and "more powerful" hydrogen fuel system.

"We flew Condor [the company's previous reconnaissance drone] for 60 hours in 1989 on regular jet fuel, and that was the maximum," said Chris Haddox from Boeing Phantom Works. "Now we're talking 96 hours."

The company explained in a statement that Phantom Eye was "powered by two 2.3 litre, four-cylinder engines that provide 150 horsepower each".

The UK Ministry of Defence (MoD) has an ongoing interest in long-endurance high-altitude planes for surveillance and is considering a several different technologies, including solar power, to meet the requirements of what it refers to as its "Scavenger project".

The aerospace and defence company Qinetiq are carrying out trials in conjunction with the MoD to develop a solar powered plane called Zephyr.

A spokesperson for the MoD said: "Four days is very good but we are considering a range of options for our deep and persistent reconnaissance requirements.

"Some of these options could be airborne for over a week." 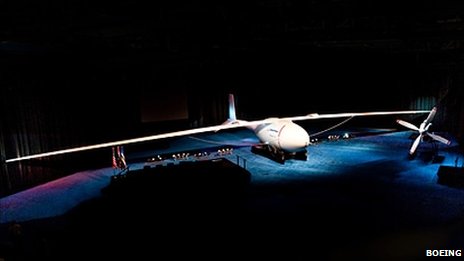