Blast from the Past: VZ9 AvroCar 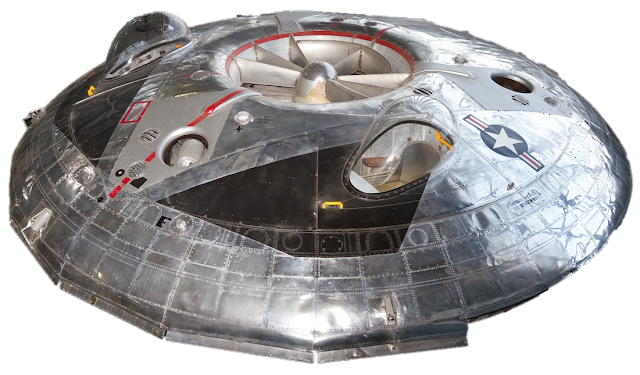 In 1952, a design team headed by J.C.M. “Jack” Frost, of Avro Aircraft, Canada, began design work on a supersonic VTOL aircraft with a circular wing. The Canadian Defense Research Board funded the effort with a $400,000 contract.
VTOL capability was to be achieved by ducting fan air and engine exhaust to the periphery of the planform and deflecting the air flow downwards. Close to the ground, this provides a cushion effect where the lift exceeds the thrust due to increased pressure on the underside of the aircraft.
This phenomenon was confirmed in a wind tunnel test. For transition to forward flight, the air flow would be gradually redistributed backwards. Frost was convinced that a thin, circular planform wing, or flying saucer, was the ideal shape to take advantage of both the ground cushion effect (for STOL overload capability) and supersonic flight.
Originally designed as a fighter-like aircraft capable of very high speeds and altitudes, the project was repeatedly scaled back over time and the U.S. Air Force eventually abandoned it.
Development was then taken up by the U.S. Army for a tactical combat aircraft requirement, a sort of high-performance helicopter. 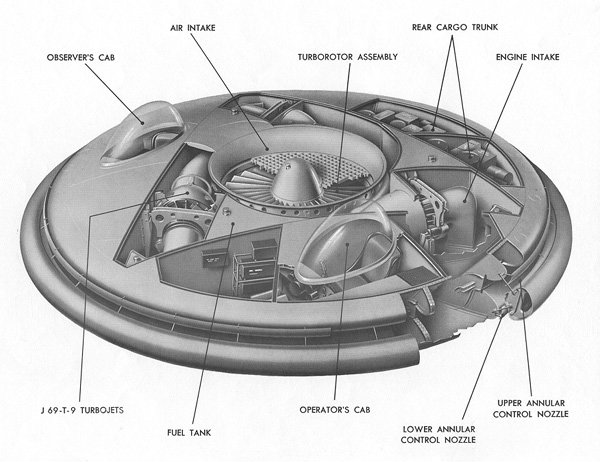 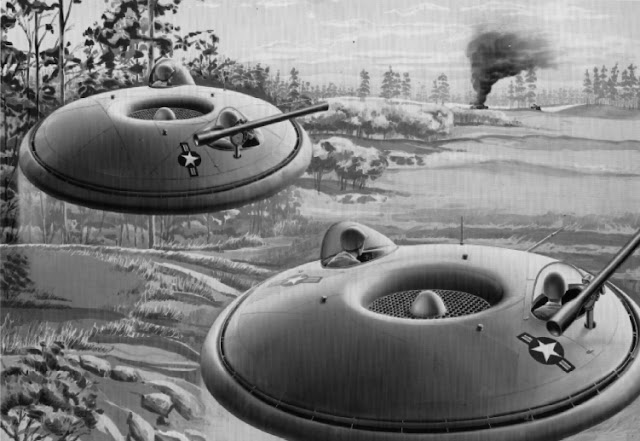 Initial performance requirements for the Avrocar were a ten minute hover capability in ground effect and 25 mile range with a 1000 lb payload.
Work began in earnest and a $1.77 million contract was awarded for a second Avrocar in March 1959.
The first Avrocar rolled out of the factory in May 1959. At rollout, projected performance was far in excess of the requirement, with a 225 Kt maximum speed, 10,000 ft ceiling, 130 mile range with 1,000 lb payload, and hover out of ground effect with 2,428 lb payload.

Maximum takeoff weight with transition to forward flight out of ground effect was calculated to be 5,650 lb, maximum weight with a transition in ground effect (GETOL) was 6,970 lb.
The Avrocar was 18 feet in diameter, 3 feet thick, and had two separate cockpits. The pilot’s cab was located on the forward left side of the vehicle with the crew cab on the right. A third compartment in the rear of was provided for cargo storage. 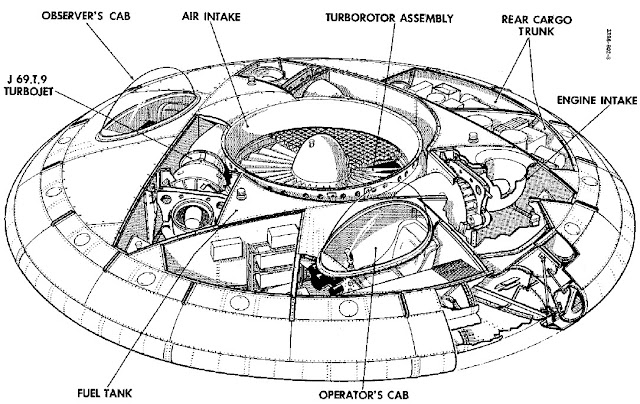 The Avrocar was lifted by the efflux from a five foot diameter central fan, called a turborotor. Exhaust from three Continental J-69 turbojet engines (920 lb thrust ea) was ducted to the outer rim of the turborotor which had 124 small turbine blades.

Driven in this fashion, the turborotor took in and propelled ambient air from a central opening on top of the vehicle. This air, mixed with the turbine exhaust, was ducted to the periphery of the vehicle from which it exited through a four inch high annular nozzle.

Each engine was connected to its own fuel and oil tank. The fuel tanks were not interconnected, although this was planned in a later version. 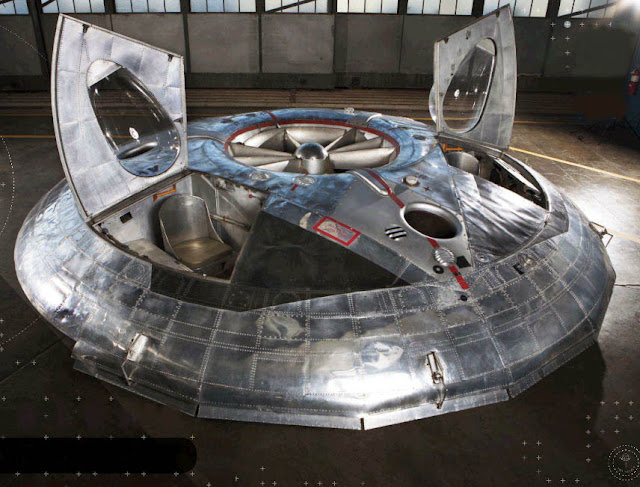 On June 9, 1961, the second and final USAF flight evaluation of the Avrocar was conducted at the Avro facility. During these tests, the vehicle reached a maximum speed of 20 Kts and showed the ability to traverse a ditch six feet across and 18 inches deep. Flight above the critical height was impossible. The flight test report summarized a litany of control problems.

Avro proposed radical modifications to the vehicle to address the major problems. Frost’s team developed two new designs, one with a large vertical tail and one with a wing with tip mounted verticals. Both designs used two 2700 lb thrust GE J-85 turbojets in lieu of the three 920 lb thrust J-69’s and increased the turborotor diameter from five to six feet.
The proposals were rejected, and the program was terminated in December 1961.
You must log in or register to reply here.
Similar threads
Blast from the past: first successful Agni-III missile test- 12 APR'2007
Blast from the Past: Sukhoi and its offer for MMRCA
Putin blasts Georgia for ‘erasing Soviet past’
Balochistan: 7 Paki Terrorists killed in IED blasts; Baloch Freedom Fighters suspected
Share:
Facebook Twitter Reddit WhatsApp Link