Blast from the Past: Sukhoi and its offer for MMRCA

Blast from the Past: Sukhoi and its offer for MMRCA

When IAF issued Request for Information (RFI) in 2001 for MMRCA tender, IAF in MMRCA tender was looking for an aircraft in medium class category , IAF had initially had planned to purchase 126 Mirage 2000-5s to equip seven squadrons but later deal was opened to other players to avoid single vendor deal.

Sukhoi Bureau sensing opportunity to sell more fighters after successfully completing MKI project for India , had proposed to India development of S-55 fighter based on Su-27 aerodynamics powered by single example of the Saturn AL-31 TVC engine instead of two, S-55 could have been scaled down accordingly to a smaller layout.

Sukhoi Bureau had done research work on S-55 in 90's but after collapse of Soviet Union no single prototype was developed and project was in cold storage, Proposed S-55 was supposed to borrow heavily from Sukhoi 30 MKI in avionics and design, Sukhoi had kept radar nose cone diameter similar to Su-30, which could have allowed it to carry same radar as MKI.

S-55 aerodynamic configuration resembled that of the Su-33 fighter the Su-30, But India refused to consider a further derivatives of Sukhoi Su-30 for MMRCA and also rejected initial proposal of a Joint venture on S-55, so No RFI or RFP was sent to Sukhoi Bureau. S-55 by many was considered paper plane and no serious thought about it was ever given to it, although RFI and RFP was sent to almost all companies barring Chinese companies, Sukhoi was also kept out of this process . India eventually allowed Gripen NG Demo and Mig-35 aircrafts which were not fully developed to participate in MMRCA trails; Sukhoi was interested in development of S-55 prototype if IAF had send out RFI and RFP for MMRCA requirements to them but that never happened. 10 years down the line MMRCA deal is yet to be signed. 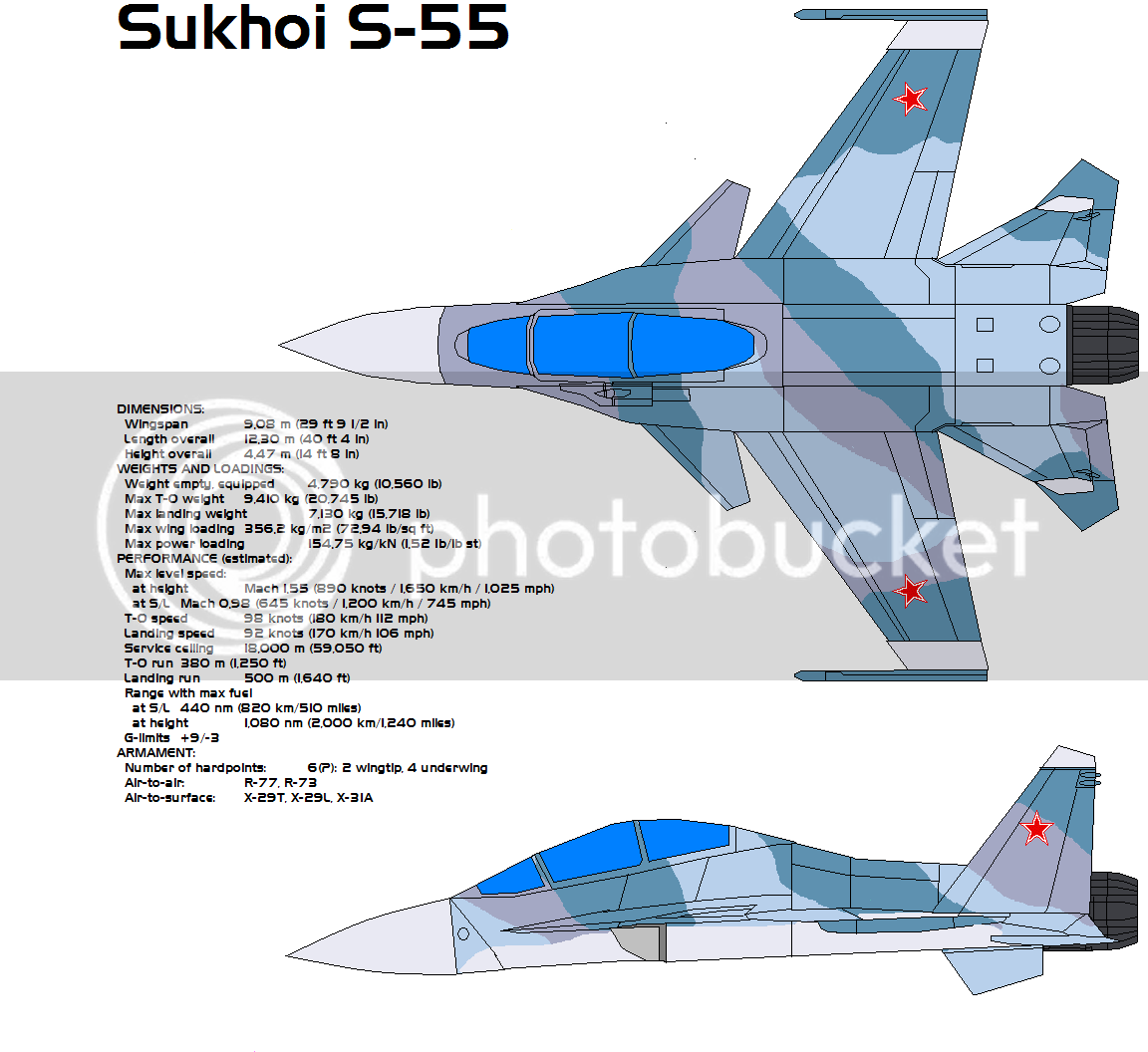 With joint development, this IMHO would have given us an light fighter with advanced engine technology, which could have been mass produced along with Tejas. Also, this would have paved the path for the S-56 carrier borne light fighter as well.

Awesome opportunity lost. I guess at that time DRDO was too confident about Kaveri. With this, we could have had engine design and production capability of Saturn AL-31 /AL-41 TVC.

We wouldn't have been able to afford it because it needed development funding. Mirage-2000 was the better option.

Mig-35 was a better option then this, comparatively.

The idea of the MMRCA was to keep Sukhoi out of the deal.

Why the specs in the article and the pic are different?
You must log in or register to reply here.
Similar threads
Blast from the past: first successful Agni-III missile test- 12 APR'2007
Blast from the Past: VZ9 AvroCar
Putin blasts Georgia for ‘erasing Soviet past’
Balochistan: 7 Paki Terrorists killed in IED blasts; Baloch Freedom Fighters suspected
Share:
Facebook Twitter Reddit WhatsApp Link