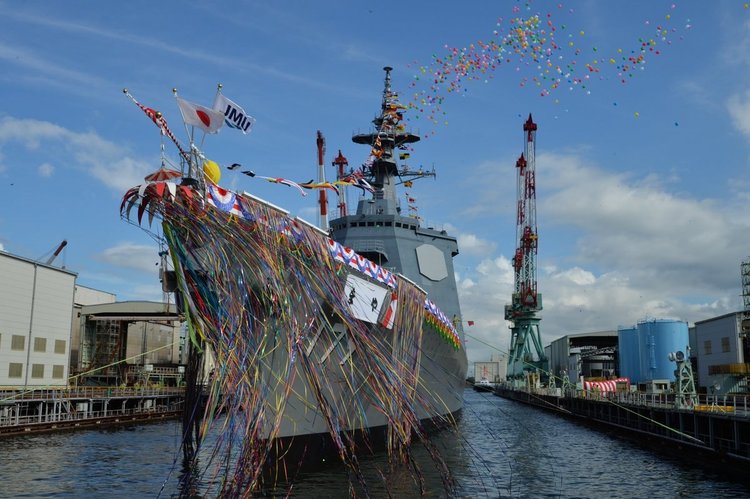 
Japan recently launched a new class of destroyer with top-of-the line US missile-defense technology, and despite Japan's mostly defensive posture, China portrayed the ship as a dangerous menace.

The seven decades since World War II, which concluded with the US dropping two atomic bombs on Japan, have seen the rise of a strong US-Japanese alliance and peace across the Pacific.

Japan, following its colonization of much of China during the war, renounced military aggression after surrendering to the US. Since then, Japan hasn't kept a standing military but maintains what it calls a self-defense force. Japan's constitution strictly limits defense spending and doesn't allow the deployment of troops overseas.

But threats from North Korea, which several times has fired nuclear-capable missiles over Japan, have prompted a desire in Tokyo for missile defenses, which the US has obliged, manifesting itself in part in Japan's new Maya destroyer class.

"It's not a big deal that they have this ship," Veerle Nouwens, an Asia-Pacific expert at the Royal United Services Institute, told Business Insider. "They're using it for military exchanges or diplomacy. That's effectively what it's doing by going around to India, Sri Lanka, and Singapore."

The new destroyer isn't a radical departure from Japan's old ones and will spend most of its time training with and visiting neighboring militaries. The destroyer isn't exactly a rubber ducky, but it has one of the more peaceful missions imaginable for a warship.

One reason it may have drawn rebuke from Beijing is simple geography. This destroyer will have to pass through the South China Sea, and that is extremely sensitive for Beijing, which unilaterally claims almost the whole sea as its own in open defiance of international law.

"Once absolute security is realized by Japan and the US, they could attack other countries without scruples," one such expert said, "which will certainly destabilize other regions."

"China seeks full control over the South China Sea," Nouwens said. "We can say that quite squarely. It seeks to displace the US from its traditional position from its regional dominance in Southeast Asia and the Asia-Pacific more widely."

Since World War II, the US, particularly the US Navy, has enforced free and open seas and a rules-based world order. Imposed at a massive cost to the US, this order has enriched the world and specifically China, as safe shipping in open waters came as a given to businesses around the globe.

But now, Nouwens said, "China is threatening to lead to a situation where that may not be a given anymore."

China has repeatedly threatened force against countries that seek to undertake simple activities, like fishing, within their own UN-designated maritime borders. But when a US Navy ship passes through the South China Sea, Beijing calls it provocative, unhelpful, or destabilizing.

That the only two countries to ever engage in nuclear war can now work together as partners looking to protect the rights of all countries on the high seas might represent a welcome and peaceful development.

But for Beijing, which fundamentally seeks to undermine that world order to further its goals of dominating Asia, it's cause for worry.

France’s air and sea presence in the region asserts its support for a maritime security order based on shared rules and norms, writes Mathieu Duchâtel 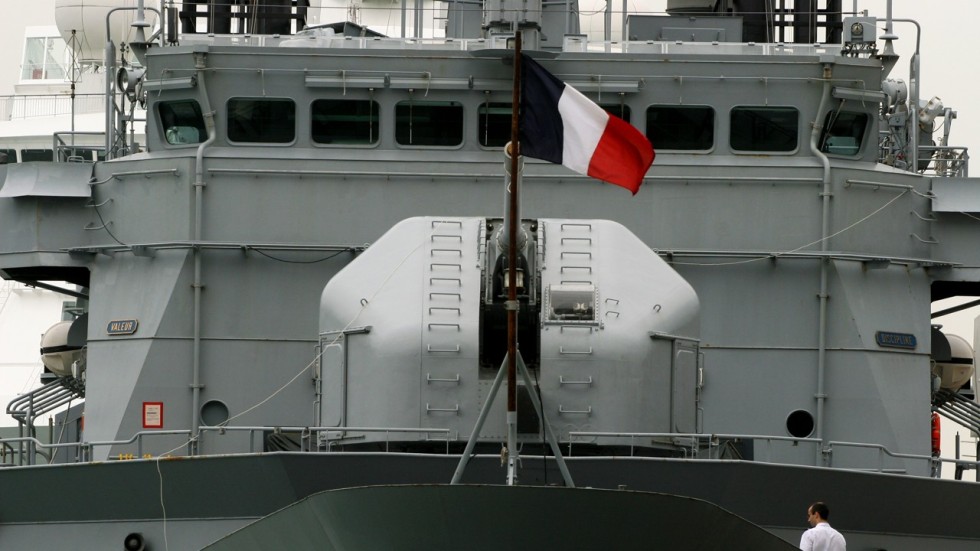 The deployment is part of Pitch Black, an annual multilateral joint exercise described by the Australian host as “pivotal to ensuring [the] air force remains ready to respond whenever the Australian government requires”.

It will be followed by Mission Pegase in August, when a French Air Force contingent is to visit Indonesia, Malaysia, Singapore and India.

The French Ministry of Armed Forces describes that mission as helping to “deepen our relations with our main partner countries”, “maintain operational condition so that the air force can be deployed anywhere in the world and showcase France’s power projection capacities and defence aeronautics industry”. 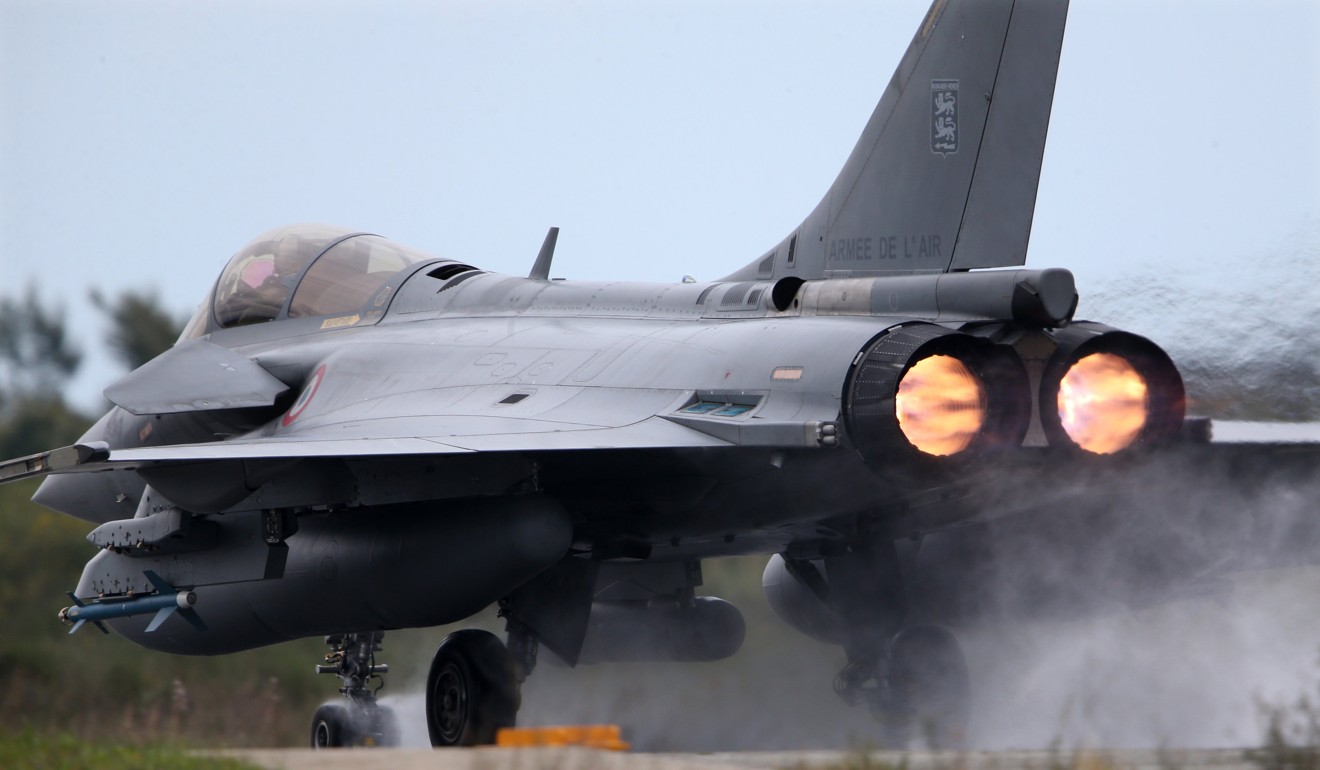 The contingent will transit through the southern tip of the South China Sea, providing France with a new occasion to assert what it sees as its freedom of navigation and overflight under the United Nations Convention on the Law of the Sea, or UNCLOS.

French and British navies draw closer in the Pacific. Should China worry?
This show of air power follows regular deployments by the French navy in the South China Sea.

Since 2015, the annual Jeanne d’Arc mission, a training exercise for future navy officers carried out by one Mistral-class amphibious assault ship and one frigate, has systematically sailed through the South China Sea in the spring. 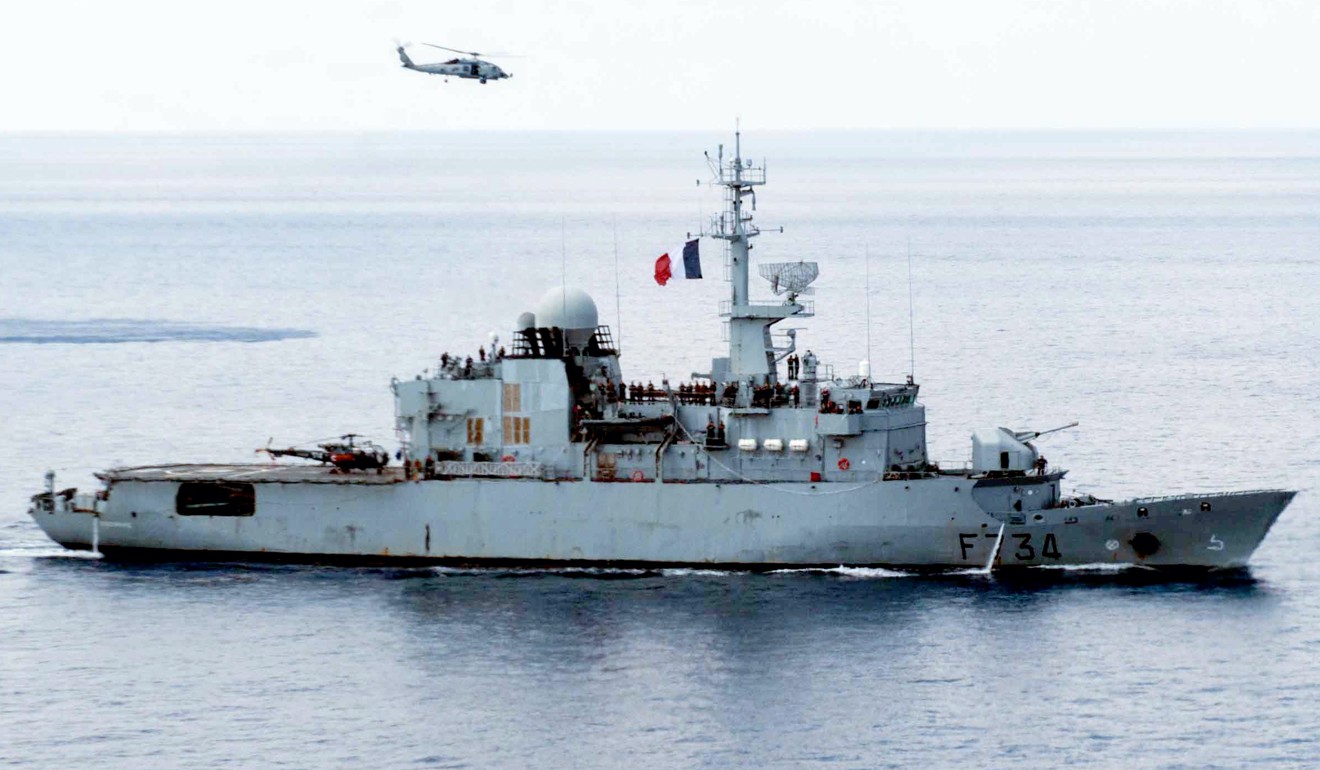 French President Emmanuel Macron vows to stand against Chinese ‘hegemony’ in Asia-Pacific during trip to Australia
France’s decision to regularly deploy military assets in the South China Sea must be taken for what it is: an exercise in signalling.

As with all such operations, what matters is ensuring the message is accurately understood by the recipients, and that it affects their behaviour. 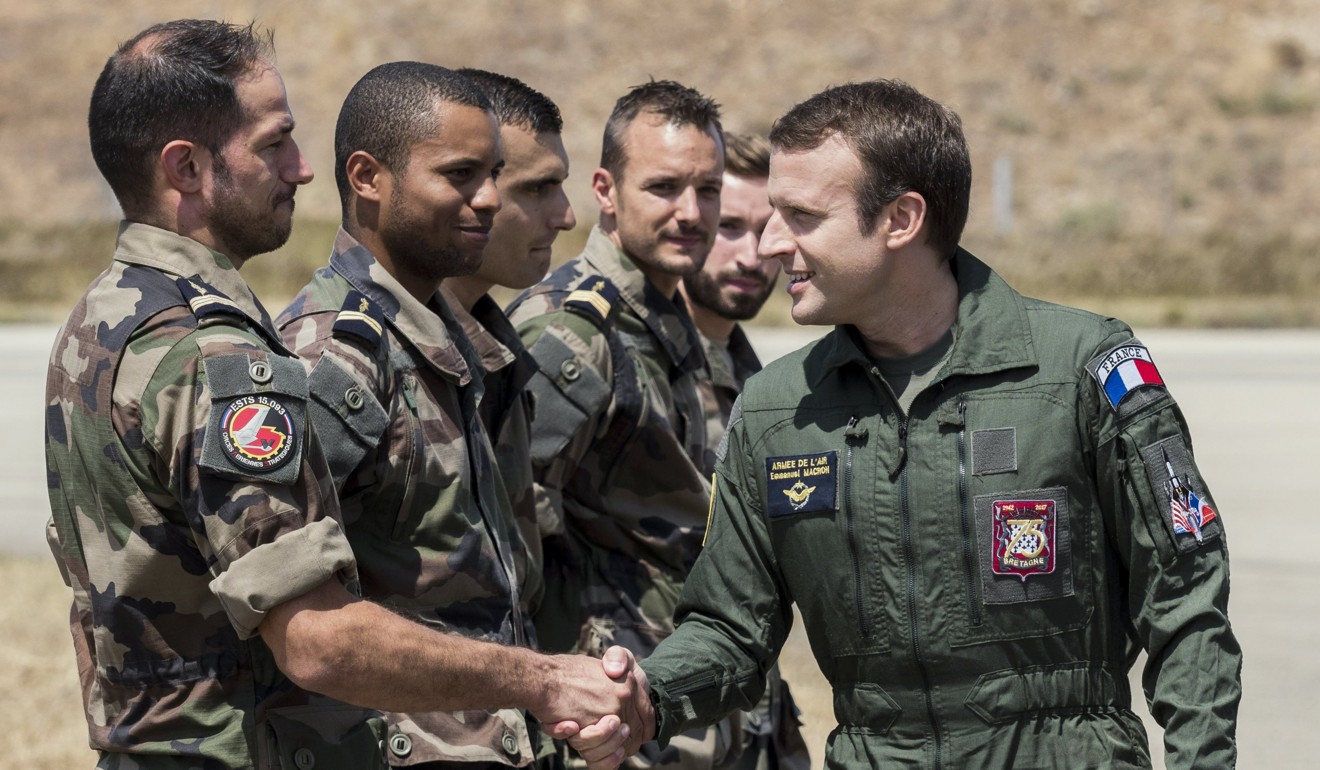 The first signal is directed at China. It can be summarised in one word: “counter-intimidation”.

In the context of China’s use of military power to create a fait accompli in the South China Sea, it is seen as important to convey to Beijing that the French military will operate in the space allowed by international law – without interference from China.

Macron takes the right road with China
This is why the FREMM-class Auvergne frigate conducted its first deployment in the South China Sea in October, testing anti-submarine equipment in a contested area where the PLA Navy has sought undersea supremacy.

Similarly, the Jeanne d’Arc mission is conceived as a “tool of knowledge and anticipation”, according to the French defence ministry. As with any deployment by any navy, there is an intelligence dimension to the operation, as the French forces gain a more precise understanding of an area subject to competition over maritime security and the risk of armed conflict.

It should come as no surprise if the French navy boosts its South China Sea presence, since France’s commitment to a rules-based maritime order seems understood even in Beijing.
The second signal is directed at the international community and concerns French support for a maritime order based on international law.

Like the US Navy, the French navy has an institutional culture of upholding its interpretation of UNCLOS, especially on the two contentious points: what is allowed during innocent passage and the right to maintain a naval presence in all exclusive economic zones.

As China has yet to clarify its claims for territorial waters and an exclusive economic zone in the South China Sea, especially in the Spratly Islands, the important element, from a French perspective, is the principle: what is at stake in the South China Sea is the future of the rules-based international order.

A third series of messages target France’s major partners in Europe, especially Britain and the EU. The implementation of the 2010 UK-France Lancaster House Treaty and the construction of a combined joint expeditionary force are a cornerstone of France’s relations with Britain, taking on particular importance in the context of Brexit.

France’s warm welcome of Royal Marines helicopter detachments to the Jeanne d’Arc missions in 2017 and 2018 shows that of all European nations, Britain is the most like-minded when it comes to assessing security trends in East Asia.

The French intention regarding the EU is to create a coalition in Europe in support of a common foreign and security policy that takes military power seriously and operates globally, rather than in Europe’s periphery. 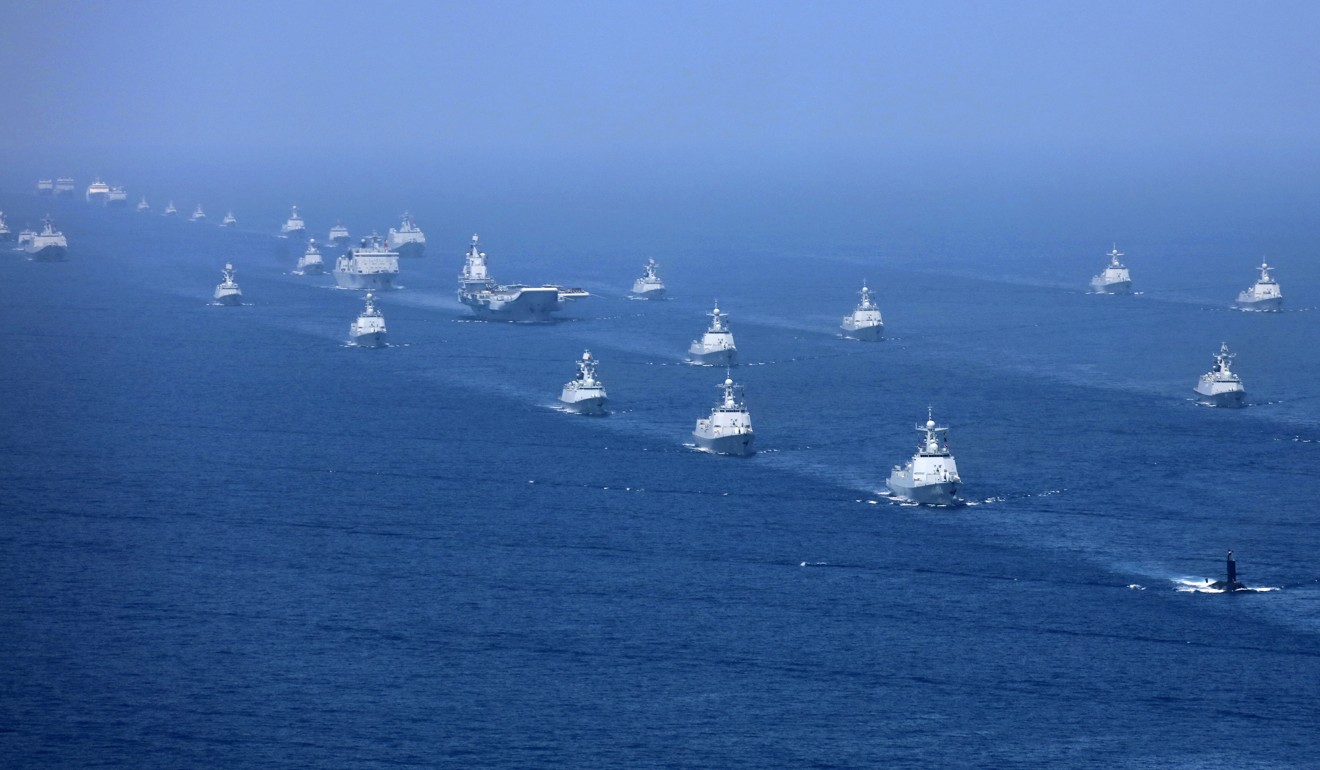 Taking European observers on board French ships during the Jeanne d’Arc deployment serves that objective.

The fourth message has gradually taken its current form under the presidency of Emmanuel Macron: a clear endorsement of the “free and open Indo-Pacific” terminology, a notion crafted to dilute the US-China rivalry and bring India into a coalition of those willing to constrain China’s rising influence.

The terminology exerts a magnetic attraction in French strategic circles because it gives even more legitimacy to a global security influence for France and stresses an order based on universal rules and norms.

Managing the cost in terms of its relations with China has been an important consideration for France. While Germany’s preference for frank, closed-doors talks extends to the South China Sea, France has taken more risks by pursuing public exposure.

Women join the ranks of France’s nuclear submariners
Yet, the French posture has had only a minor impact on Beijing-Paris relations. And both sides have managed the issue cautiously, to prevent their fundamental disagreement over the South China Sea from affecting other areas of the bilateral relationship.

On the one hand, France insists on the distinction between non-aggressive transit, the term preferred by the Marine Nationale, and American freedom of navigation operations that involve sailing within the 12 nautical miles around some of China’s artificial features in the Spratly Islands to deny that they are entitled to territorial seas.

On the other hand, China refrains from publicly criticising the French operations, while it could have decided otherwise.

This is particularly true today, when the pressure exerted on China by the Trump administration on several fronts, especially trade and investment, engenders an accommodating mood in Beijing with regards to Europe.

In practice, France’s support for the “open and free Indo-Pacific” does not prevent China from prioritising a search for common ground on trade, investment and issues of global governance.

Looking ahead, it should not come as a surprise if the French navy stepped up its presence in the South China Sea. So far, the serious and prolonged French commitment to a rules-based maritime order seems to be understood even in Beijing.

While there is little evidence that such deployments may radically change China’s calculus regarding the South China Sea, this is not the point. The important thing is that this exercise in signalling is to be taken together with other actions in support of a maritime security order based on shared rules and norms.

China strength is his money , his business , then PLA . If you really want to work on china then help india in his development . world should invest in India .


Under current govt india is planing for defence corridor & Industries in future Defnce Boom will be in india . World should help current govt .

arya said:
China strength is his money , his business , then PLA . If you really want to work on china then help india in his development . world should invest in India .


Under current govt india is planing for defence corridor & Industries in future Defnce Boom will be in india . World should help current govt .
Click to expand...

I think that India needs no such help

nimo_cn said:
I think that India needs no such help
Click to expand...

China has to think why all country are worrying about china because they can see hungriness of power in china . Usa will not be superpower in future . only & only India can stand & can control china .

Otherwise china will be car without break
I

nimo_cn said:
I think that India needs no such help
Click to expand...

Yeah, we need no such help if China behaves as a decent civilized and stops supporting terrorist nations such as Pakistan. It should also realize that no matter what it ultimately cannot stop India rise by using its fake war mongering tactics.
You must log in or register to reply here.
Similar threads
Report: India May Have Put Beijing Within Range of Its Nuclear Weapons
Calling Out “Expansionism”: The Modi Way - The Indian PM has deftly turned Beijing’s regular complaints about history back on itself.
Begging in Beijing? Pakistan sacks state TV chief after broadcast gaffe
Show loyalty by eating pork, Beijing tells Uighur Muslims
Share:
Facebook Twitter Reddit WhatsApp Link