–Six Pakistani terrorist martyred in IED attack in Mach; one killed in shootout with militants in Kech
QUETTA: Seven soldiers were martyred in two separate terror attacks in Balochistan on Tuesday, the Inter-Services Public Relations (ISPR) said in a statement.
According to the ISPR statement, terrorists targeted a vehicle of the Frontier Corps (FC) in Mach using improvised explosive devices (IEDs), claiming the lives of six Pakistan Army soldiers.

The martyred soldiers were identified as Naib Subedar Ihsan Ullah Khan, Naik Zubair Khan, Naik Ijaz Ahmed, Naik Maula Bux, Naik Noor Muhammad and Abdul Jabbar.
In a separate incident at Kech, another soldier, Imdad Ali was martyred in an exchange of fire with militants.
Pakistan Muslim League-Nawaz (PML-N) President and Leader of the Opposition in the National Assembly Shehbaz Sharif “strongly condemned” the terror attack and expressed sadness over the martyrdom of the soldiers.

Minister for Human Rights Shireen Mazari also condemned the incident. She said that terrorist outfits were coming under “increased pressure” as they were increasingly isolated internationally. She added that “Pakistan continues to make gains in its fight against terrorism”.
Earlier this month, five FC soldiers and one officer were martyred after their vehicle was targeted with an IED near the Pakistan-Iran border.

In a tweet, the military’s media wing said the security personnel were returning from patrolling in Buleda — 14 kilometres from the Pakistan-Iran border — to “check possible routes used by terrorists in the mountainous terrain of Makran”.
As they were returning, their vehicle was targeted with a remote controlled IED, it added.

--Six soldiers martyred in IED attack in Mach; one killed in shootout with militants in Kech QUETTA: Seven soldiers were martyred in two separate terror attacks in Balochistan on Tuesday

Earth is NOT flat as you study in your jungle book. What you goes round comes round and round and round. Your terrorist masquerading as soldiers are coward of the 1st order. Baloch Freedom Zindabad!!! India gives full "moral support" to #Balochistan and #BalochistanFreedomStruggle 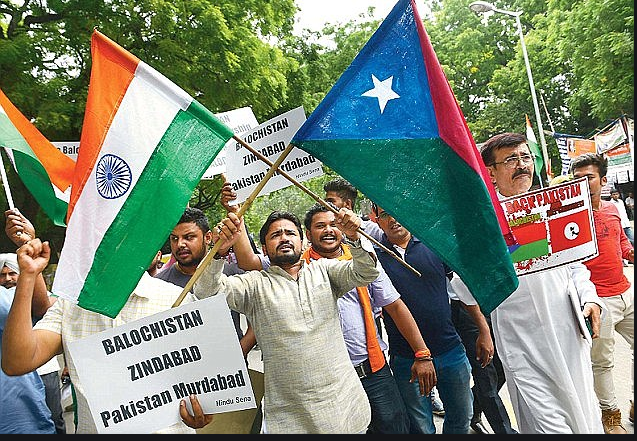 Pukjabi army has left no option for Baloch people to take gun and fight.

Baloch is independent country and they must be fighting to get freedom.
You must log in or register to reply here.
Similar threads
2 Paki soldiers killed in Balochistan IED attack
Paki army on run in Balochistan following BLF attack
Practical means to liberate Balochistan and Sindhudesh?
Pak Army involved in 'genocide' of Hazara Shias in Balochistan: PoK activist after killing of 11 miners
Share:
Facebook Twitter Reddit WhatsApp Link