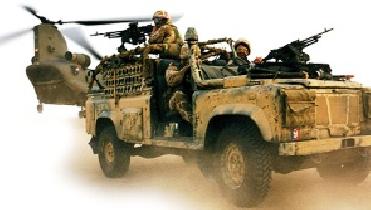 The British group knocked US defence giant Boeing out of the top position in 2008, according to the ranking of biggest defence groups worldwide tallied by the Stockholm International Peace Research Institute (SIPRI).

"The main reason that BAE became the largest arms-producing company in the world in 2008 is the increase in its US sales, which outpaced decreases elsewhere including in the UK," the think tank said in the study.

With arms sales in 2008 of USD 29.2 billion, Boeing fell from first place in 2007 to third following BAE Systems with USD 32.4 billion and US group Lockheed Martin with USD 29.9 billion.

It was followed by three US groups -- Northrop Grumman, General Dynamics and Raytheon -- ahead of European group EADS in seventh place, Italian company Finmeccanica in eighth, L-3 Communications in ninth and Thales of France in tenth position.

The biggest Russian group on the list, air defence systems maker Almaz-Antei, was number 18 on the list.

In 2008 the 100 biggest defence groups had arms sales of USD 385 billion, up 11 per cent from the previous year, according to SIPRI.

"This is more than three times the size of the total development aid of OECD countries in 2008," SIPRI said, noting that such aid reached USD 120 billion.

Putting the data in perspective, the think tank said that arms sales of Lockheed Martin alone topped US development aid by four billion dollars and that BAE Systems sales were greater than the gross domestic product of 105 countries.

SIPRI's ranking focuses on companies' arms sales which make up only 48 per cent of Boeing's turnover and 70 per cent of Lockheed Martin's revenues.

In BAE System's case, arms sales make up a far larger share of its sales with 95 per cent of the total.