Pulled to the ground by a web of ropes, a baby elephant learns the hard way how to become a circus performer.

In case the youngster doesn't want to co-operate, a trainer stands by with one of the sharp metal hooks used to manage the animals.

The disturbing picture is one of a series taken by a former trainer which campaigners say reveal the brutal reality of how elephants are prepared for circus work. 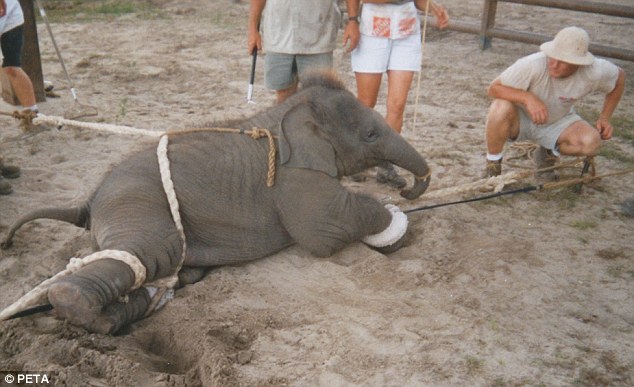 Trussed: Bound by its neck, legs and trunk and watched by a man with a hook, a baby elephant learns to lie down 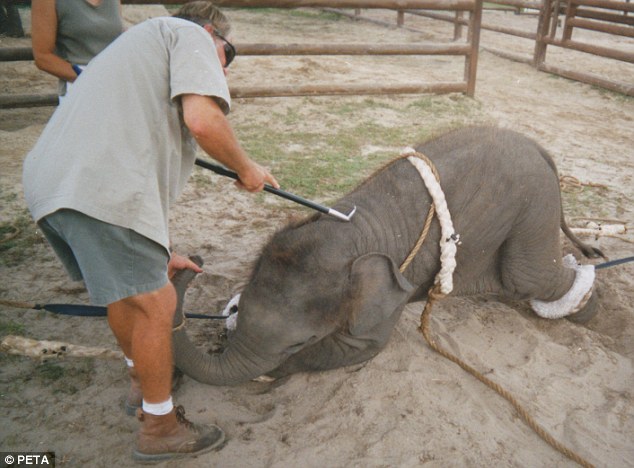 Down: A trainer manages the animal with a sharp metal hook​
The pictures show them being dragged to the ground by ropes, chained side by side, pinned down by a hook in the back of the neck and checked by cattleprods.

Peta - People for the Ethical Treatment of Animals - say the elephants are also separated from their mothers by force. 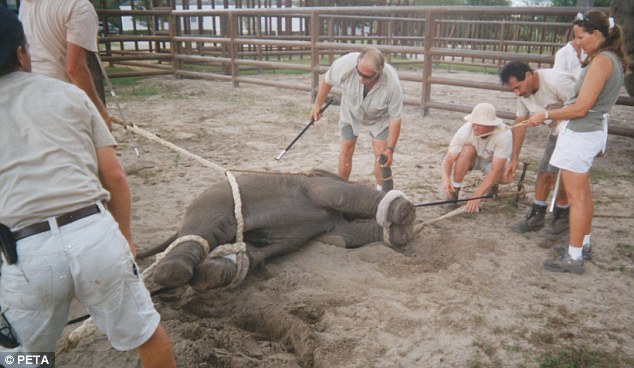 Teamwork? A group of handlers hold the baby elephant with ropes 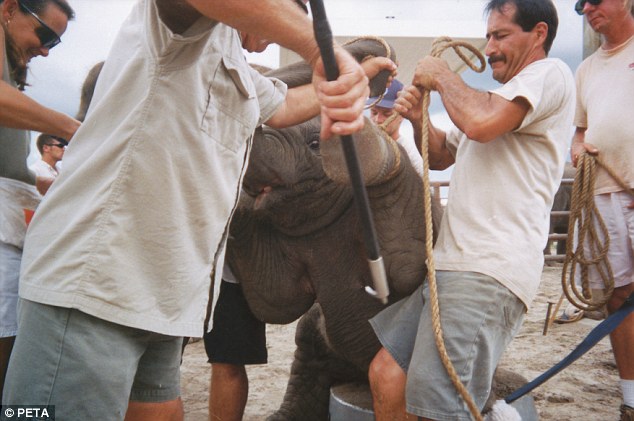 'Torture': Peta - People for the Ethical Treatment of Animals - says the methods are widespread​
The photographs are being used to spearhead a campaign to tighten up laws on the use of wild beasts in circuses.

The Government here is considering legislation to impose stricter conditions on their care, training and performance, particularly where young are concerned. 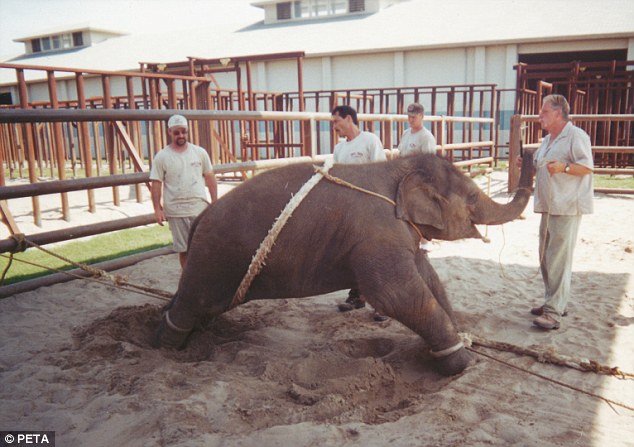 Campaign: The photos are being used to spearhead an effort to tighten laws over the use of wild beasts in circuses 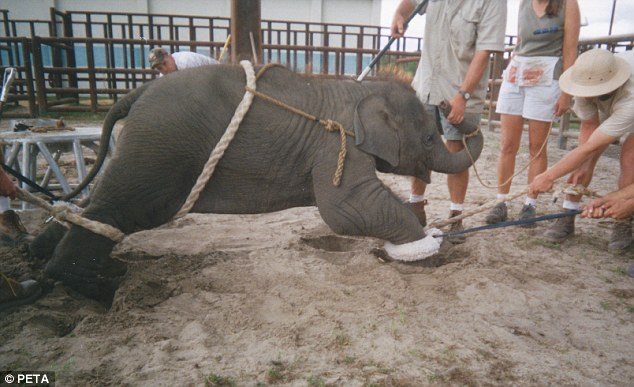 Revealed: A handler who died last month asked Peta to use the images to ease his conscience after he'd gone​
The pictures were taken in the U.S. by handler Sammy Haddock, who worked for the Ringling Bros' Barnum and Bailey Circus until 2005.

They were taken more than seven years ago - but Peta says such methods are widespread, and 'effectively amount to the torture of defenceless animals'. 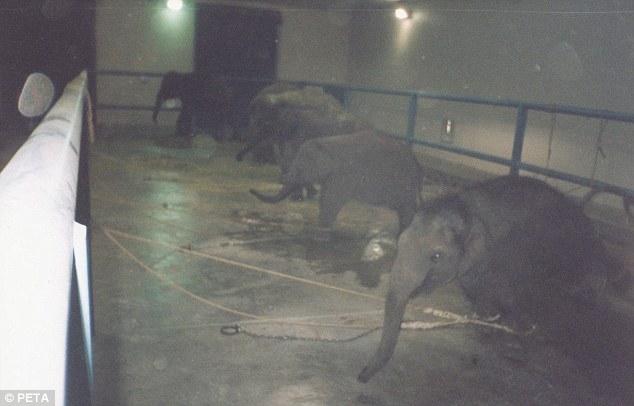 Stark: Baby elephants are bound in a barn 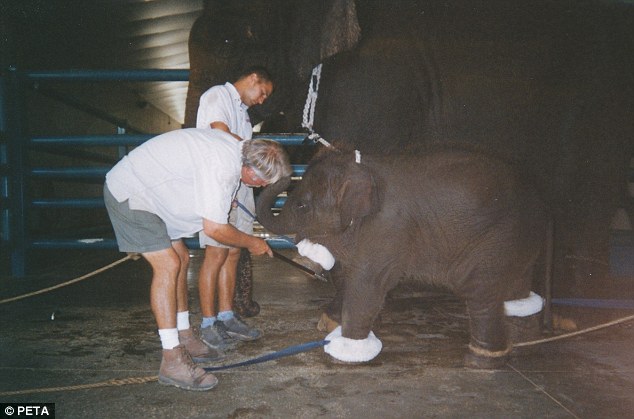 Two against one: The anchor elephant is trained in a barn​

Haddock died last month and asked Peta to use his pictures to ease his conscience about the kind of treatment he administered during eight years at the Ringling centre in Florida.

Peta director Poorva Joshipura said: 'All the evidence suggests that the methods described by Sam Haddock are standard operating procedures.' 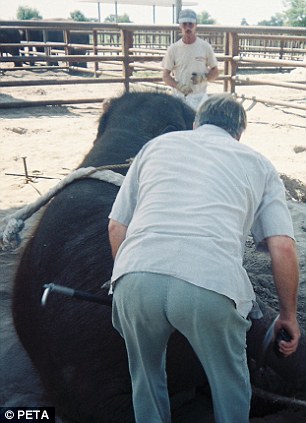 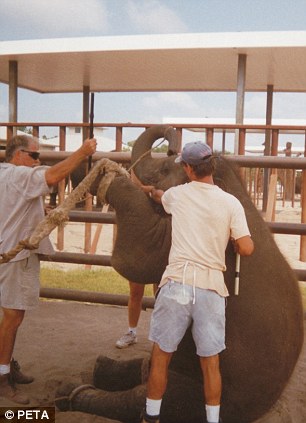 Dedicated areas: The lying down outdoor training area (l) and sitting up area (r)​
Ringling's dismisses Peta's claims as 'from the last century' and denies cruelty. It says it separates calves from adults only when they are old enough to demonstrate natural independence. 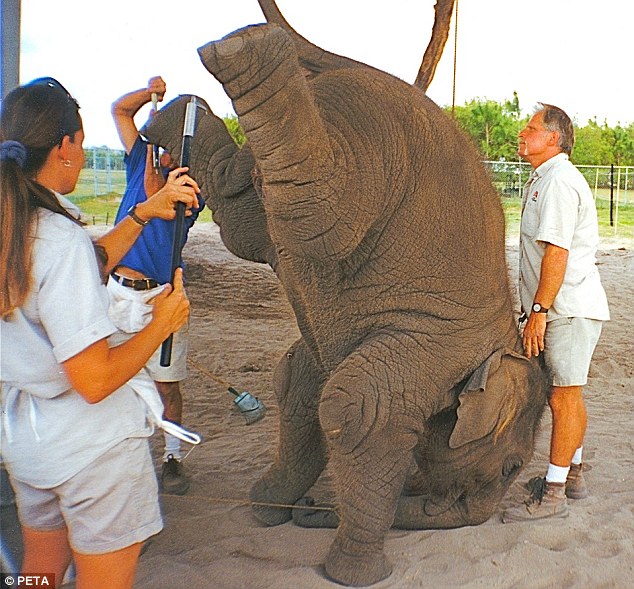 Unnatural: The outdoor training area where elephants learn to stand on their head 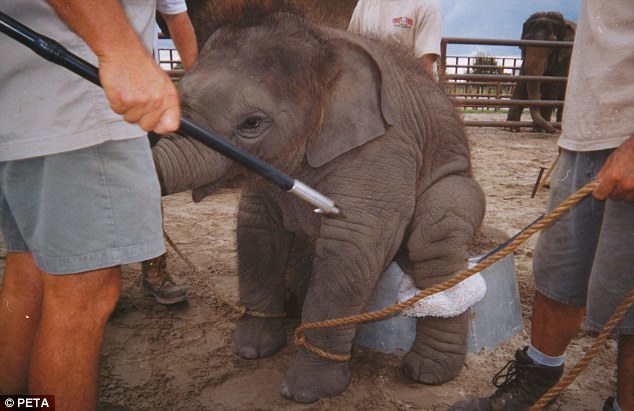 Grimace: A baby elephant is trained to sit on a tub​

And people say PETA are crazy? As far as I'm concerned, they are heroes. They should be awarded the Nobel Peace Prize, not a schmuk like Obama who has done nothing for anybody.

Unfortunately, humans are far too arrogant and evil to hold themselves accountable for their own actions. Let's hope that there is such a thing as an afterlife, so that such kind of people may rot in hell for all eternity. (
You must log in or register to reply here.
Similar threads
UK US TOPS in Obese, unhealthiest babies in the world
Ashdoc's movie review---Baby driver
China announces designer baby breakthrough | Fox News
Fidel Castro holding baby Justin Trudeau
Share:
Facebook Twitter Reddit WhatsApp Link