Astute takes to the sea

Astute The Royal Navy's newest state of the art Submarine leaves barrow-in-Furness on her maiden voyage to start sea trials.

The biggest and most powerful attack submarine ever built for the Royal Navy – Astute – took to the seas this weekend.

Astute set sail from Barrow-in-Furness to start her first set of sea trials and is now heading to her homeport of Faslane on the Clyde in Scotland.
Measuring nearly one hundred metres from bow to stern, Astute is longer than ten London buses. When fully stored, she will displace 7,800 tonnes of sea water, equivalent to 65 blue whales.

The Astute submarine has the latest stealth technology, a world-beating sonar system and is armed with 38 torpedoes and missiles - more than any previous Royal Navy submarine. She will be able to circumnavigate the entire globe while submerged and advanced nuclear technology means that she will never need to be refuelled.
The Minister for Defence Equipment and Support, Quentin Davies, said:
“This is a significant milestone for Astute as she sails for the first time towards her homeport of Faslane. The Astute class of submarines will deliver a step change in capability for defence in terms of anti-submarine and anti-surface warfare, protecting the deterrent, and providing land attack and intelligence gathering. Astute will now begin a set of sea trials ahead of her full acceptance with the Royal Navy next year.

“I would like to pay tribute to both the MoD and BAE Systems Submarine Solutions staff who have worked so hard to achieve this remarkable feat of engineering.

DE&S Director Submarines, Rear Admiral Simon Lister, who has overseen the final stages of the submarine production and preparation for sea trials, said:
“Building a nuclear submarine is a huge challenge and demands the highest standards of design, engineering and manufacturing to ensure she can safely perform her demanding duties.
“Submarine building combines a huge variety of elements: sometimes it is more like blacksmithing manipulating the steel of the hull, and sometimes it like brain surgery, dealing with advanced technology and performing tasks to an almost unbelievable level of accuracy.
“Astute represents the sum of thousands of individual efforts, and everyone involved in her creation can be proud.”

Astute is expected to arrive in Faslane later this week. 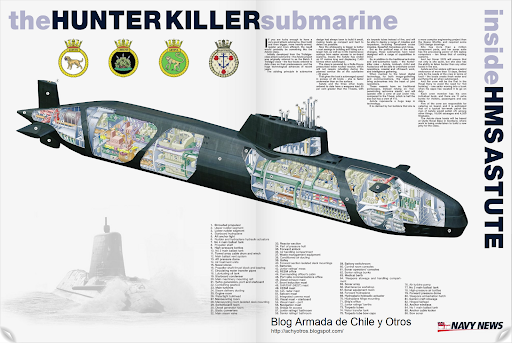 Nice! Here's a little more clarity on that image:

Now to see whether those 39,000-odd acoustic tiles reduce radar signature as claimed, and whether the 2076 sonar and DESO 25 high-precision echosounders, really track vessels "across thousands of square miles of ocean".