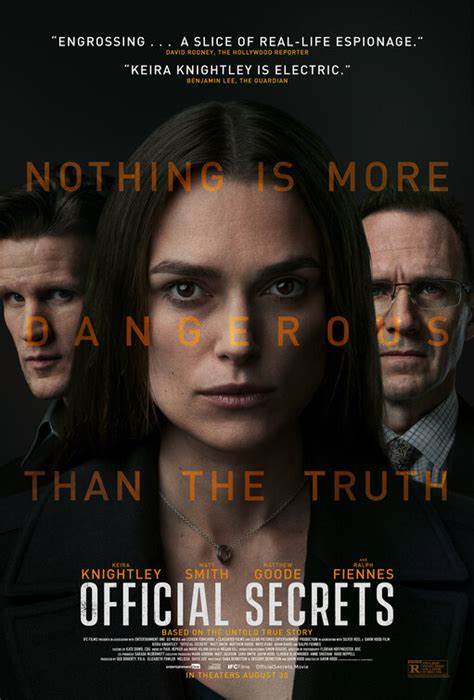 The movie is based on the gutsy act of a woman who worked for the British intelligence agency Government communications headquarters ( GCHQ ) . Her name was Katherine Gun , and she saw a secret memo which showed an illegal spying operation of the United States on UN diplomats going to vote on a resolution on the forthcoming invasion of Iraq in 2003 . The spying operation could have potentially been used to blackmail the diplomats into voting for the resolution at a time when most of the world was opposed to the US UK joint invasion of Iraq . But Katherine leaked the memo to the press and through the press the world came to know of the potential for blackmail .

Eventually the US did not pay heed to world opinion and the Iraq invasion did happen . But as Katherine foresaw , the invasion resulted in thousands of British and American troops being killed and even much larger number of deaths among the Iraqis . In the movie Katherine is played by Kiera Knightley .

In the movie Katherine is shown to be opposed to the proposed Iraq invasion right form the start . In her free time she sits glued in front of her TV watching Tony Blair and George Bush blabbering lies about the need to 'liberate Iraq' , and lying even more glibly about alleged weapons of mass destruction that Iraqi ruler Saddam was supposed to possess . So when she sees the memo she is appalled and she leaks it to the press .

But when she sees the whole thing on the front pages of newspapers , only then she realises the enormity of what she has done and is scared of the consequences . But when an investigation is done in her office about who leaked the memo , she gathers the courage to admit the truth after some prevarication .

She is instantly sent to jail as she has breached the official secrets acts , which bars employees from leaking what they see on their computers in office to anyone outside . The movie shows how a person can be harassed by the state if he or she dares to go against the powers that be , especially if that person is in what is referred by those who are after her as a 'lowly position' .

Of course , this is civilised Britain . I know some countries ( including my own !! ) where worse could happen to such a person in a 'lowly position' going against the state . Yet Katherine does go through an ordeal . Her husband who is a Kurdish Muslim migrant is almost deported , she is threatened that merely hiring a lawyer to represent her position in court is a breach of the official secrets act , and people ( government agents presumably ) follow her in public transport .

Yet when her lawyer asks her to plead guilty and get a minor sentence , she decides to fight the case by declaring the whole Iraq war as illegal and plead not guilty . So does the bold move succeed in court ? Watch the movie for the answer .

The movie rests partly on acting performances and they are pretty good . Also it rests on the tense situations that the lady has to go through and they are even better . Photography and colours and background music is appropriate for the situations and the audience I was watching with was in sympathy with the courageous lady . So was I .