LETHALFORCE said:
Pakistanis seem to be the only morons spewing this islamic BS. Don't really
see any other muslims talking this shit.
Click to expand...

I read somewhere that Azerbaijan is one of the most irreligious countries in the world.

nick_indian said:
I read somewhere that Azerbaijan is one of the most irreligious countries in the world.
Click to expand...

Then what are pakistanis inbreds doing there??
N

LETHALFORCE said:
Then what are pakistanis inbreds doing there??
Click to expand...

They just need a mauka to blow themselves up somewhere in some part of the world in the name of Islam. What's their contribution to mankind otherwise.

Kumata said:
I am pissed off with Israeli's .... Assholes of the highest order. they themselves got ethnically cleansed almost and survived somehow to tell the tale and are supporting Assholes mullas....

No doubt our MEA babus have consumed fevicol and are sitting idle....

Come what may, history is that muzzies have no brains despite having better weapons and what not...

turkey can bring as much 600 $ a month fighters from syria but they will not go back alive and will enjoy their 72 hooors... i am hoping pdophile allah have enough stock in hell... LOL

Having advance weapons is one thing but having a mind to operate them to best of their abilities is another and that's where armenia will win this hands down to azerbaijan's mulla....U don't win wars with weapons alone ... strategy matters a lot and armenians are better in that IMO. they are letting the jiahdi mullas come into their side and than roasting them from all sides... one got to play to your strength and they are showing to the world ....

KSA,Erdogan and Iran are all in competition for leadership of the Umma.Iran leadership dislikes Erdogan's Turkey and KSA.So Iran supports Armenia who also hate Turks.Azeris in the meantime are providing Israel with base(s) against Iran.So Israel supports Azerbaijan despite sour relations with Azerbaijan's chief supporter Erdogan.Pakistanis pretending to be protector-in-chief of Mussulmans(except Uyghurs) have jumped in to support Azeris.So now we have Turkey,Pakistan and Israel on Azeri side and Russia,India and Iran on Armenian side.As William Clay put it "This is quite a game, politics. There are no permanent enemies, and no permanent friends, only permanent interests."

nick_indian said:
I read somewhere that Azerbaijan is one of the most irreligious countries in the world.
Click to expand...

97% Percent of the population is Muslim and with influx of Turkic influence coming from Turkey the reislamisation of the population is happening again and fast. The population used to be secular/atheist because of the Soviet Union but that all changed after the collapse of the Union. Majority of these former Soviet states are looking for a new identity and culture to cling too for strength or standing in this harsh new world. Islam is a perfect choice for this, uniting the state and population against an enemy and helps form a cohesive state in the process.

Russian Money and hatred for Turkey meddling in a region that has been traditionally under Iran’s sphere of influence. Iran even works with India against Pakistan an Islamic state. Iran fights for land and influence not for religion. Religion is just a tool for the top Mullas to fool the gullible jihadi population into working for them.

Flying Dagger said:
Nope... Not much happening there usual stuff.
Click to expand...

I hope something happens

It looks like Azeri are not that bright. They have been claiming many drone strikes recently. I wonder how many of them are just Armenian Cardboard toys. Lol

Kumata said:
One need to see the way Population of peaceful is increasing...did not decreased even once while all others have a variation. Good things is Hinduism will stay consistent .,,,
Click to expand...

Hindus won’t stay consistent for long. The one of the largest portion of Muslims in the world comes from the Indian Subcontinent especially from India. As Muslim population in India increase the global Muslims population will also increase. Hindus will be outnumbered 5 to one even in India. Population control methods have already started to reduce the population of Hindus in India in many states and region while the Muslims in India are still consistently growing. Hindus are more inclined towards population controlling than Muslims as Hindus still cling to secularism and are more educated in the leftist education system. If PCB is implanted in India I concerned how PCB will effect the Hindu/Dharmic Population in the country.

utubekhiladi said:
which drone is being used here?

I am not dhoti shivering, but we if conflict breaks out during our border, we will seriously miss armed drone capabilities like this one.
Click to expand...

Drones are useless if you have any jamming tech & even some Mistrals.


nick_indian said:
It doesn't matter what the international community thinks. Artsakh is Armenian territory, almost all people are Armenian.
Click to expand...

It doesn't matter who it "legally" belongs to either..
It'll go to the winner.

Turkey & Pakis are both openly supporting Azerbaijan. We should get involved to have some of our field tested & hopefully earn a name for themselves.
A

Turkish drones are operating with impunity against Armenian targets. It's a calamity. What happened to Russian-sourced AD in Armenia military, TOR, S-300, etc.?

asianobserve said:
Turkish drones are operating with impunity against Armenian targets. It's a calamity. What happened to Russian-sourced AD in Armenia military, TOR, S-300, etc.?
Click to expand...

utubekhiladi said:
which drone is being used here?

I am not dhoti shivering, but we if conflict breaks out during our border, we will seriously miss armed drone capabilities like this one.

Drones are highly doubtful in high mountains. The altitude may not work in favour of drones.
Drones will be highly useful at sea and in plains.

May work well at lower altitudes.

Prakshepak said:
I don't get what Russkies are upto. Those sanctions have seriously hurt or they are looking to lure Turkey away from NATO. Even their public response after Turkey shooting down their frogfoot was bewildering...
Click to expand...

Re birth of soviet empire?!
If Armenia decides to accede into Russia, you will get some interesting geopolitics there.

Bleh said:
Drones are useless if you have any jamming tech & even some Mistrals.


It doesn't matter who it "legally" belongs to either..
It'll go to the winner.

Turkey & Pakis are both openly supporting Azerbaijan. We should get involved to have some of our field tested & hopefully earn a name for themselves.
Click to expand...

Exactly we can create a market for Dhanush and Pinaka and may be a show off for LCH later once situation is cool and few sorties by Tejas once Sam are taken out . They can do some bombing and may be takeout some old mig 29s Azers fly.

Let it earn a reputation bad or good OFB will know.

asianobserve said:
Turkish drones are operating with impunity against Armenian targets. It's a calamity. What happened to Russian-sourced AD in Armenia military, TOR, S-300, etc.?
Click to expand...

Turkish drones are not operating with impunity they are using swarm tactics to overwhelm the nearly none existent Armenian air defenses. But nevertheless, a number of Azeri/Turkish/Israeli drones have been shot down. This is not to say that the drone strikes have not caused considerable losses to Armenian forces. Those drones are in fact very effective.

The problem is that most of the more capably Armenian SAMs are guarding high value assets such as military bases and the capital. The remaining air defenses are primitive and made up of limited 9K33 Osa’s and Maybe some Tor and Buk systems? It’s unlikely those air defenses can cover all of Armenia anyways, there are always gaps and weak spots such as mountain that drones can exploit.

The Azeris and probably Turks have used sworm drone attacks as mentioned earlier. Any air defenses can be overwhelmed with enough swarm attacks, in the case of Armenian air defenses. They are hardly considered capable due to the very limited numbers and mostly old systems spread out over the country. For any air defenses to work well the defenses have to be layered. This provides a better and more spread out umbrella of protection. If one battery is out of munitions, malfunctions or has an incompetent crew then another neighboring battery can engage the threat.


The biggest threat is smaller loitering drones like the Harpy. It’s very small thus it’s difficult to detect to begin with; moreover, many radars simply disregard the Harpy as clutter since its speed and altitude is similar to a bird. It can also fly low enough and or use mountains to hid from radars altogether.

The things is in the past Armenian have destroyed many Azeri drones including Harpys. This is the difference between swarm attacks and casual crossing the LOC. 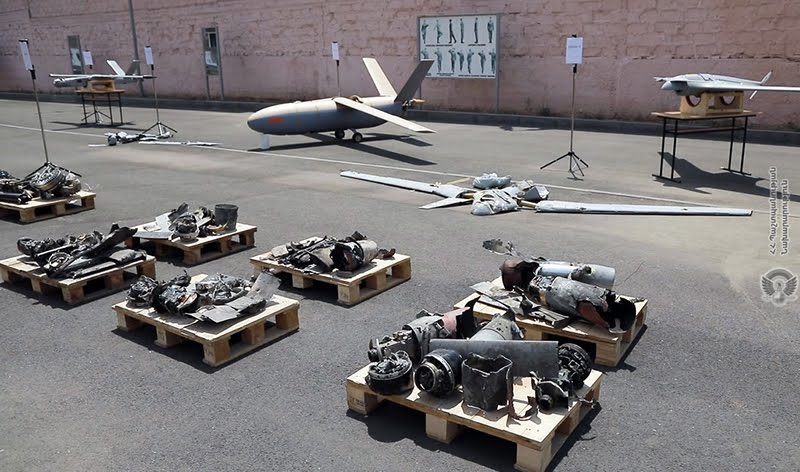 The Azeris are using heavy artillery, MLRS and drone swarming to overwhelm Armenians and its working pretty well. It’s believed that Turkey has also used F-16s, transported Jihadists from Syria and is supplying weapons and possibly even using drones themselves. The main problem the Azeris have is that they have very poor soldiers that seem demotivated and have been filmed retreating on several occasions. The Armenians seem to have much superior infantry that are highly motivated. Despite the overwhelming manpower, armor, air power and technological gap the Azeris can’t break the Armenians will. At least not yet.

The Azeris have been launching a push or something like a pincer from two directions, maybe one is a diversion or it’s just meant to spread out Armenians thin. This is not looking good for Armenians but some reports say the Armenians have caused the Azeris to fall back. Armenia needs drones to even the playing field. Also if enough Russian/Ukrainian and possibly Georgian or Belorussian volunteers come this may change the outcome. Russian/Ukrainian volunteers with Russian advisers have held off the Ukrainian military for 5 years and even encircled and destroyed entire Ukrainian battalions. Azeris have little fight in them and will rely on drones rather then soldiers.
Last edited: Oct 1, 2020

Flying Dagger said:
Exactly we can create a market for Dhanush and Pinaka and may be a show off for LCH later once situation is cool and few sorties by Tejas once Sam are taken out . They can do some bombing and may be takeout some old mig 29s Azers fly.

Let it earn a reputation bad or good OFB will know.
Click to expand...

Performance wise they still have miles catch up. Relatively stable tension remained in the Artsakh conflict zone overnight To improve the tactics, the adversary tried to carry out certain regrouping and relocate its military, which were detected and prevented in time by the Defense Army units.


Iran will by no means allow terrorist organizations to transform the regions adjacent to our northern borders into a threat to our national security. A transfer of clashes to the Caucasus will bring a much larger catastrophe than the Karabakh conflict”.

Ya'll Nibbiars Inflatable decoys will be more and more involved in any further conflicts. That is one of the remedies for the everpresent use of UAV. The sensors must evolve as well to distinguish the real from the dummy. 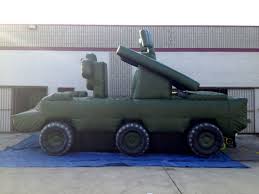 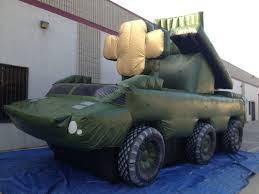 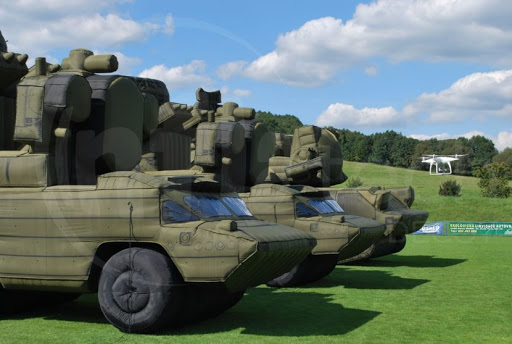