The clip comes amid the ongoing economic crisis in Pakistan, as the International Monetary Fund(IMF) plans to send its SOS mission to the country this month for suggesting ways to the cash-strapped government to help deal with the budget deficit they are facing.

Another example of what all this pious and pure land of Muslims does to get Azhar-bhaijaan to notice them.
A

Haldilal said:
Ya'll Nibbiars I've read a bunch of news reports about this private Turkish firm who is sending the Syrian mercenaries to fight against Armenia but none ever mention the name of the company. The only company that I know who could be doing this is SADAT which is owned by Erdoğan's close friend. And till now most of the Mercenaries have not received any money.
Click to expand...

Erdogan has a personal stake in this conflict. The Turkish Drones used by Azerbaijan in this Conflict Bayraktar TB2 which was created by Turkish Company Bayraktar Tactical UAS. This company is special because it is owned by Selcuk Bayraktar who is in-fact the son in law of none other than ErDogan himself marrying his youngest daughter Sumeyye in 2016. Erdogan claims Russia, US, France are supplying weapons to Armenia

Renewed clashes between Azerbaijan and Armenia erupted on September 27, with intense battles raging in the disputed region of Nagorno-Karabakh

tass.com
Chomu Erdogan claims Russia, US, and France are supplying weapons to Armenia.

What are the chances one of those three will actually get actively involved there? US wouldn't until after elections are over. Russia seems to be the most likely, they wouldn't want the US interfering in their region.

Rohan Naik said:
why is that Israel supporting AbbaBhaiJaan?
Click to expand...

“According to the Stockholm International Peace Research Institute, Israel provided nearly two-thirds (61%) of all arms imports to Baku over the past year, which have had a significant influence on how the current hostilities are being fought.

One of the most significant systems Israel has provided the Azeris is the IAI Harop. This is a loitering munition, referred to in popular parlance as a “suicide drone”, as it self-destructs upon hitting the target. It is a sophisticated weapon, easily able to overcome any systems possessed by the Armenians and allowed the Azerbaijani military to hit targets at will.”

“Israel has a much firmer strategic relationship with Azerbaijan. Despite being a Muslim majority nation, the Azeris were quick to recognize Israel after independence. They have since looked to the Jewish state for military and logistical support.

The main goal of Israeli policy in recent years has been the need to isolate and contain Iranian regional influence. Azerbaijan borders Iran and, according to leaks, has permitted Israel to use its airfields to strike nuclear targets in the Islamic Republic.

In addition, Israeli intelligence has reportedly utilized Azerbaijani infrastructure to create listening posts and gather critical Iranian security information. These actions place Baku at great risk of Iranian retaliation. On Tuesday, Iran said its forces had shot down an Israeli-made drone that veered from the fighting in Karabakh on its territory.

Israel sells the Azerbaijanis arms both to reward it for the risks it takes on its behalf and to help defend the country against Iran.

Not all Israelis are happy with this policy, however.”

Armenia has less resources than Azerbaijan but is giving the enemy massive Causalities in combat.

MIDKNIGHT FENERIR-00 said:
Armenia has less resources than Azerbaijan but is giving the enemy massive Causalities in combat.
Click to expand...

This war is a little more complex that just territory the turks and azeris view it as a muslim vs christian kafir war.
They are recruiting mercaneries from islamic nations but christian world does not seem to show any interest in supporting armenia??

LETHALFORCE said:
This war is a little more complex that just territory the turks and azeris view it as a muslim vs christian kafir war.
They are recruiting mercaneries from islamic nations but christian world does not seem to show any interest in supporting armenia??
Click to expand...

No such thing exists today lol.
You have all secular liberal countries today.
Every Christian sect or heretical versions now are only used as puppets by Globalists to further their agenda.

Also these aren't "mercenaries", you have Syrian jihadis backed by Turkey being send to Azeriland to fight in the Karabakh war, while you have Paki SF and jihadis again sent by them to fight for Azeriland.
Arabs are missing, and Iranis wouldn't like Armenia being wrecked by the Azeris who are bum chums with Israelis.

In the end this is an extension of Turkeys antics in the region, in Libya they are propping up some Arabs vs other Arabs backed by UAE, Egypt and Greece, in Aegean sea they are trying to drill for Oil/Gas in Cypriot/Greek waters, and as you know in Syria they are trying to annex the northern parts, Erdogand ke gand me immense chul hai, which is why you see all this.
For all you know Turkey may have convinced the Azeris to do this.

A large proportion of the area of Eastern Turkey were Armenian long ago, this is the part of the slow death of the Armenian race at the hands of the Turki( Azeris are also Turk ).

LETHALFORCE said:
This war is a little more complex that just territory the turks and azeris view it as a muslim vs christian kafir war.
They are recruiting mercaneries from islamic nations but christian world does not seem to show any interest in supporting armenia??
Click to expand...

Turkey been a member of NATO is the problem. NATO members can’t attack each other meaning if a Western state gets involved in the conflict and killed a Turk that would be against NATO charter and if Russia got involved and killed a Turk technically NATO has an obligation to defend turkey and attack Russia. Christians are trapped either way and can’t help the Armenians from Islamic Jihadi Terrorists.
Last edited: Oct 21, 2020

MIDKNIGHT FENERIR-00 said:
Turkey been a member of NATO is the problem.
Click to expand...

They got in because of the cold war but they were never allowed in the EU.

Ya'll Nibbiars Photo taken today by @emileghessen showing Russian military personnel deployed at the Armenian border with Artsakh, presumably from the 102nd Military Base in Gyumri.

Ya'll Nibbiars the losses of the Azerbaijan. 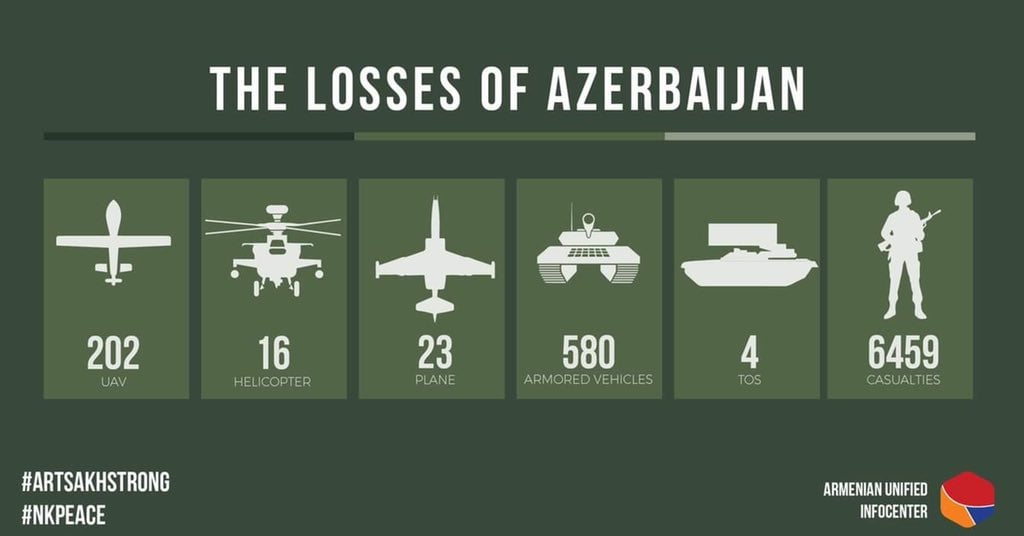 LETHALFORCE said:
They got in because of the cold war but they were never allowed in the EU.
Click to expand...

Yea Europeans weren’t that stupid to let turkey into the European Union. Letting the turkey join European Union would be a great catastrophe for Europe, Caucasus Region and Middle East. Turkey should be kicked out from NATO. Turkey is the weakest link in the group and a member who can betray NATO any time for its ambitions.