There has been no contact with the submarine since Wednesday morning, according to the navy, prompting Buenos Aires to launch an air and sea search for the missing vessel.

"We will do what is necessary to find the submarine as soon as possible," President Mauricio Macri said on his Twitter account on Saturday.

The TR-1700 class diesel electric submarine had been returning from a routine mission to Ushuaia near the southernmost tip of South America, to its base at Mar del Plata, around 400 kilometers (240 miles) south of Buenos Aires.

Among those on board is Argentina's first female submarine officer, 35-year-old weapons officer Eliana Krawczyk.

The San Juan is one of three submarines in the Argentine fleet.

Sixty-five meters (213 feet) long and seven meters wide, it was built by Germany's Thyssen Nordseewerke and launched in 1983.

Awful news from Argentina . Time to prey for a miracle

Made in Germany doesn't mean what it used to. RIP to the fallen.
K

How is it a western sub?? It belongs to Argentina. It was commissioned in 1985 and is almost 32 yrs old and at the end of its operational life.

now is the 5th day
they say they got some distress signal?
still they are not able to locate ..
that's bad

Its a really old sub and I don't think argentina has a DSRV. Lets see what happens.
K

The Argentine navy was already in a pathetic state so how does it help India???
The RN and Canadian navies cannot operate without USN support but that's not relevant to the topic.
R

Kalki_2018 said:
The Argentine navy was already in a pathetic state so how does it help India???
The RN and Canadian navies cannot operate without USN support but that's not relevant to the topic.
Click to expand...

Other countries weakening that are following the us world order is good for india.argentina is a follower so.

Argentine navy has a very poor record of maintenance and has little funding, British diplomacy and moles made sure they cannot rise against them ever again ..

Btw, These submarines had excellent service record during falkland wars but let down due to dud torpedoes ..

No wonder these are dangerous to operate now, specially when funds are low and spares are hard to find and not made indigenously..

Lets keep this thread to the topic.

Their were people who were in this submarine and i don`t find its exciting to see people rejoice about it ..


Rahul Prakash said:
You should read about the joke that royal Navy is becoming.they are decommissioning ships very fast and are maybe a half or less the size of Indian navy.this navy once ruled the waves.now its pathetic.however this is good for India.

We should pray for more accidents,delays in procurement,stupid procurements,over expensive procurements,etc to happen more in all European navies and the us navy.

One way to rise up is to push everyone down.

Even though here people get disappointed with the speed of procurement,a look at the western navies makes India look good.

Only China is doing ship building at a good and economical way.
Click to expand...

There is hope. The submarine tried to establish contact on Saturday so it was surfaced at the time.

« Argentina's defence ministry said seven failed "satellite calls" that it believes came from a missing naval submarine were detected on Saturday in a likely sign the crew of 44 was trying to reestablish contact.

The calls, believed to be from the ARA San Juan submarine, lasted between four and 36 seconds in the late morning and early afternoon, the ministry said in an emailed statement. The ministry said it was working on tracing the location with an unnamed U.S. company specialized in satellite communications. »


Kalki_2018 said:
Its a really old sub and I don't think argentina has a DSRV. Lets see what happens.
Click to expand...

The San Juan is equipped with an underwater rescue system. US Navy is sending a recovery team

Their last major purchase was from France. 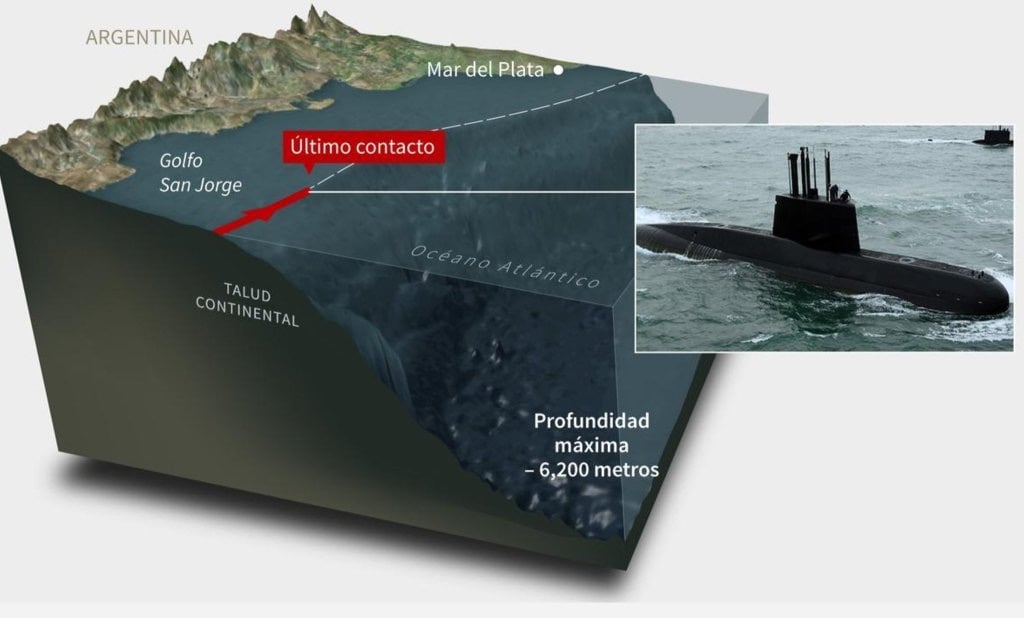 Not only the submarine might be running out of oxygen very soon (only 7 days reserve) but it has also disappeared not far from a deep abyss where no rescue system can work.
Another Koursk tragedy l am afraid.

That is not a good way to die. It's not the death, it's the waiting that will be very painful for the crew and their families. Let's hope that these folks get rescued in time.

@Dovah @Razor Please clean up this thread of idiotic ramblings. Thanks.

Kunal Biswas said:
Argentine navy has a very poor record of maintenance and has little funding, British diplomacy and moles made sure they cannot rise against them ever again ..

Btw, These submarines had excellent service record during falkland wars but let down due to dud torpedoes ..
Click to expand...

This submarine had a complete overhaul and life extension completed in 2013. Thyssenkrupp installed new engines, new electrical systems, batteries and certified this submarine for another 15 years. It was their shoddy work that caused this tragedy and is a direct symptom of their refusal to upgrade their antiquated facilities for an impending buyout that never came.

Not only the submarine might be running out of oxygen very soon (only 7 days reserve) but it has also disappeared not far from a deep abyss where no rescue system can work.
Another Koursk tragedy l am afraid.
Click to expand...

Damn ! The shelf is so narrow and I though sharp ridge only exist in Chilean coast along Andes .

Sound heard in Argentine sub search was likely ‘explosion’
MAR DEL PLATA, Argentina (AP) — An apparent explosion occurred near the time and place an Argentine submarine went missing, the country’s navy reported Thursday, prompting relatives of the vessel’s 44 crew members to burst into tears and some to say they had lost hope of a rescue.

Navy spokesman Enrique Balbi said the search will continue until there is full certainty about the fate of the ARA San Juan, despite the evidence of an explosion and with more than a week having passed since the submarine disappeared. It was originally scheduled to arrive Monday at Argentina’s Mar del Plata Navy Base.

The U.S. Navy and an international nuclear test-ban monitoring organization said a “hydro-acoustic anomaly” was produced just hours after the navy lost contact with the sub on Nov. 15. It was near the submarine’s last known location.

“According to this report, there was an explosion,” Balbi told reporters. “We don’t know what caused an explosion of these characteristics at this site on this date.”

The navy spokesman described the “anomaly” as “singular, short, violent and non-nuclear.”
Argentina’s navy announced on Thursday that a sound detected during the search for a missing submarine apparently came from an explosion. (Nov 23)

Relatives of the crew who had gathered at the Mar del Plata base to receive psychological counseling broke into tears and hugged each other after they received the news. Some fell on their knees or clung to a fence crowded with blue-and-white Argentine flags, rosary beads and messages of support. Most declined to speak, while a few others lashed out in anger at the navy’s response.

“They sent a piece of crap to sail,” said Itati Leguizamon, wife of submarine crew member German Suarez. “They inaugurated a submarine with a coat of paint and a flag in 2014, but without any equipment inside. The navy is to blame for its 15 years of abandonment.”

Balbi defended the Argentine Navy, saying that “with respect to the maintenance and state of our naval and air units, no unit ever leaves port or takes off if it isn’t in operating conditions to navigate or fly with total security.”

The German-built diesel-electric TR-1700 class submarine was commissioned in 1985 and was most recently refitted in 2014.

During the $12 million retrofitting, the vessel was cut in half and had its engines and batteries replaced. Experts say that refits can be difficult because they involve integrating systems produced by different manufacturers and even the smallest mistake during the cutting phase of the operation can put the safety of the ship and the crew at risk.

The Argentine navy and outside experts have said that even if the ARA San Juan is intact, its crew might have only enough oxygen to be submerged seven to 10 days. It lost contact as it was sailing from the extreme southern port of Ushuaia. The submarine’s captain had reported a battery failure.

Authorities said late Wednesday that Argentine navy ships as well a U.S. P-8 Poseidon aircraft and a Brazilian air force plane would return to the area to check out the abnormal sound, which originated about 30 miles north of the submarine’s last registered position.

The search location straddles the edge of the continental shelf, with widely varying ocean depths, some as great as 10,000 feet (3,000 meters). Experts say the submarine could not have supported pressures that far down.

“If a submarine goes below its crush-depth, it would implode, it would just collapse,” said James H. Patton Jr. a retired Navy captain. “It would sound like a very, very big explosion to any listening device.”

Whatever it was, U.S. Navy Lt. Lily Hinz said the sound detected “was not a whale, and it is not a regularly occurring sound.”

Claudio Rodriguez, brother of crew member Hernan Rodriguez, said his family suspects “the explosion was so strong that they were not able to rise to the surface or shoot any flares. They didn’t have time for anything.”

“As a family, we’re grateful to all the people who prayed for us and for the families of all the 44,” he said.
More than a dozen airplanes and ships have been participating in the multinational search despite stormy weather that has caused waves of more than 20 feet (6 meters). Search teams are combing an area of some 185,000 square miles (480,000 square kilometers), which is roughly the size of Spain.

Britain’s Ministry of Defense sent a special airplane with emergency life support pods to join the hunt that includes planes and ships from a dozen nations.

Hopes were buoyed after brief satellite calls were received and when sounds were detected deep in the South Atlantic. But experts later determined that neither was from the missing sub.

“They haven’t come back and they will never come back,” said Jesica Gopar, wife of submarine officer Fernando Santilli, choking back tears. “I had a bad feeling about this and now it has been confirmed.”

RIP for the fallen.

What an horrible fate.

Tactical Frog said:
“They sent a piece of crap to sail,” said Itati Leguizamon, wife of submarine crew member German Suarez. “They inaugurated a submarine with a coat of paint and a flag in 2014, but without any equipment inside. The navy is to blame for its 15 years of abandonment.”
Click to expand...

Is even before refurbishment they left it unused ?

I think it's going to be a wakeup call for argentine govt to speed up modernization of their military as a whole .

Don't know it's either govt negligence or other reason ,but these guys don't have a capable military transport aircraft ,even in disaster relief operation their military is pretty underarmed , when will these politician will realize that military not only fight war but also give total security to nation.