The Hindu : News / National : Antony wants indigenous aircraft carrier delivered soon
~
Cut up over long delay in the construction schedule of India's first indigenous aircraft carrier (IAC), being built in his home State of Kerala at the Cochin Shipyard Limited (CSL), Defence MinisterA. K. Antony on Tuesday asked all the stakeholders to work together and make efforts for an early delivery of the warship.
~
Upset over frequent delays on one account or the other, Mr. Antony told a high-level review meeting in New Delhi that henceforth accountability would be fixed for any furtherslippages in the ambitious national project. "We cannot go one hearing about excuses. Henceforth accountability will be fixed in case of slippages in the construction of the warship which is a national project," he said.
~
Mr. Antony's observations came at a meeting held at the Defence Ministry to review theprogress of the construction of the IAC at Cochin Shipyard. The meeting was attended by the Minister of State in Defence Ministry Jitendra Singh, Navy Chief Admiral D.K. Joshi, Defence Secretary Shashikant Sharma and seniorofficials of the CSL.
~
The 40,000-tonne IAC was to be inducted into the Navy by 2014-15 but the delay will push back the proposed induction to 2018 as well as escalating the total cost of theproject.
~
The meeting noted that most of the teething problems of the project have been sorted out. The supply of two gear boxes of the warship has also been arranged, the meeting was informed.
~
Mr. Antony said an EmpoweredCommittee has been formed under the Defence Secretary which would constantly monitor the progress in the IAC. The Minister also asked the CSL to give a firm date of induction of the carrier at the earliest.
~
Sources in the ministry said that a proposal would be sentto the Finance Ministry and the Cabinet Committee on Security (CCS) for improving the flow of funds for the project launched in 2009. Mr. Antony had told Parliament in August that the complexity of the project and it being the first ship of its kind being built in India, has led to timelines being extended.
~
The IAC is to be christened INS Vikrant after the country's first aircraft carrier which was decommissioned in 1997. With the sole aircraft carrier INS Viraat being stationed in Kochi for a check and regular maintenance and delivery of INS Vikramaditya being delayed further by a year, Indian Navy's plans to have two operational aircraft carriers has taken a hit. India also has a 65,000-tonne IAC-II on the drawing board but the delay in IAC-I have derailed it.
_

How soon is soon?

Even St Anthony, the Patron Saint for lost articles, and is credited with many miracles involving lost people, lost things and even lost spiritual goods will not be able to help.

The Blessed Saint will not even be capable of recovering the lost time causing the delays!
T

We should really start building the hull of IAC-II at another yard now, Pipavav would be a good choice given that they can build VLCC's as well, the hull could be built and floated here and then tugged to Cochin for the rest of the work once IAC-I has sailed.

make people accountable from the Planning stage and if they are successful them award them suitable reward for their efforts.
C 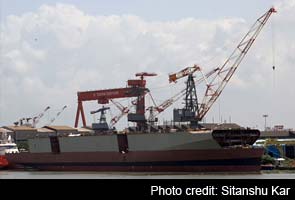 Will be over by 2014 the Navy is totally diffrent. Your going to eat your words.

until unless they are not going to upgrade machinery and bring in more talented people this thing will prevail. bring in better staff. bring in navy engineers if shipyards have lungi laborers.
You must log in or register to reply here.
Similar threads
25% IAF Hawk grounded for want of spare parts, says Antony
Antony Wants Indian-Origin Scientists From Abroad To Work For Indian Labs
AK ANTONY'S GOOF-UPS HAS LED TO LOW DEFENSE ALLOCATION BUDGET-2016
The price India is paying for AK Antony's comatose tenure
Share:
Facebook Twitter Reddit WhatsApp Link