And now there is Tehrik-e-Taliban Balochistan!

And now there is Tehrik-e-Taliban Balochistan!


PESHAWAR: Pakistani Taliban have now surfaced in Balochistan by organising themselves under the banner of Tehrik-e-Taliban Balochistan.

Engineer Asad, claiming to be its spokesman, said in a phone call from an undisclosed location in Balochistan that their organisation had no link with the Baitullah Mahsud-led Tehrik-e-Taliban Pakistan (TTP).

It wasn’t possible to verify the claim made by Engineer Asad or to know more about his identity. The man, who spoke Pashto in an accent peculiar to Balochistan, explained that the members of the Tehrik-e-Taliban Balochistan (TTB) were all Pakistanis. He said the struggle of the TTB was against non-Muslims and Western forces that had attacked and occupied Islamic countries. He said the TTB was opposed to fighting the Pakistani security forces and law-enforcement agencies and turning Pakistan into a battlefield. Instead, he said, the TTB was committed to fighting the enemies of Islam.

The TTB spokesman termed suicide bombings un-Islamic. He condemned the suicide attack that targeted and missed the JUI-F provincial head, Maulana Mohammad Khan Sherani, and other party leaders at a seminary in Pishin district on Monday. The blast killed six people.

Engineer Asad said the TTB wasn’t involved in the Pishin suicide bombing. He said it had no dispute with Maulana Sherani or the JUI-F. “We respect the JUI-F and consider it as our ally. This suicide bombing is the work of our enemies,” he argued.

If one were to believe Engineer Asad, then the group of Pakistani Taliban operating in Balochistan is different than those active in the NWFP and its tribal areas. The TTB is the latest among the Taliban groups now functioning in Pakistan and Afghanistan. The TTP members are almost all Pakhtuns but it is possible that the TTB would have some Baloch activists. The militants hailing from Punjab and operating in the NWFP and Fata are often referred to as Punjabi Taliban.


The kidnapping of a senior UN official in Balochistan points to a worsening situation in Pakistan's poorest and most neglected province, says guest columnist Ahmed Rashid.

Amid the unceasing political turmoil in Pakistan, the Baloch insurgency has been virtually forgotten.

It had been running for several years before President Asif Ali Zardari and Baloch groups declared a ceasefire last year. The insurgency resumed when the government failed to follow up the truce with meaningful talks.

The wide-ranging political and economic grievances of the alienated Baloch people remain forgotten and unaddressed.

On 2 February, John Solecki, head of the United Nations High Commission for Refugees (UNHCR) in Balochistan province, was kidnapped in Quetta and his driver shot dead, allegedly by Baloch militants belonging to the hitherto unknown Balochistan Liberation United Front.

The kidnappers have demanded the release of 141 Baloch women and several thousand Baloch males, whom the kidnappers charge have been held in secret detention by Pakistani intelligence agencies for several years.

However Islamabad denies that it is holding any "disappeared" Baloch prisoners, while Pakistani human rights organisations also say they have tried but failed to trace such a large number of disappeared women or their families.

The UN and leading Western countries have mounted a large international effort to obtain the release of Mr Solecki, who suffers from several ailments.

UN Secretary General Ban Ki-Moon and Mr Solecki's mother, Rose, have issued appeals for his release. However the kidnappers have refused to get in touch with the UN, while the US and Pakistan have said there will be no compromises with the kidnappers and he must be released unconditionally.

Prominent Baloch leaders who are sympathetic to the insurgents have strongly denied that any Baloch group was responsible for the kidnapping and have also issued appeals for Mr Solecki's release. 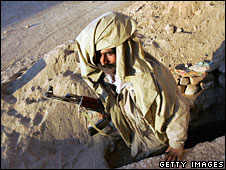 They include the chiefs and clan leaders of the powerful Marri, Bugti and Mengal tribes which have been in the forefront of the insurgency.

The kidnappers unsubstantiated and opaque demands, the fact that their group has never been heard of until now, their refusal to get in touch with the UNHCR and the fact that Baloch insurgents have never targeted Western officials before this incident, has raised serious questions among the Baloch public about who exactly the kidnappers may be.

Many fear it could be the Taleban who are trying to dirty the name of the Baloch nationalists.

The government seems to have no such doubts.

On 26 February, the head of the Frontier Corps in Quetta, Maj Gen Saleem Nawaz, said that he knew roughly where Mr Solecki was being held, back door negotiations were underway with the kidnappers and that those involved were the same old Baloch insurgents using a new name.

The military has also long insisted that the US government place Baloch insurgent groups on their list of groups that sponsor terrorism - something neither the Bush nor Obama administrations have so far declined to do.

Moreover, Balochistan is also a hotbed of tensions between India and Pakistan, with Pakistan insisting that Indian intelligence agencies are arming and funding the Baloch insurgents in order to break up Pakistan. India has denied the charges, but for decades both countries have used covert agencies to undermine the other.

The kidnapping has highlighted the growing insecurity in Quetta and other Baloch towns where insurgents have resumed their bombing and assassination campaign against the army and politicians loyal to the government.

There is seething unrest in the province with the public angry with both the army and the federal government. The failure of President Zardari to extend the ceasefire by conducting meaningful talks with the insurgents has come in for particular criticism.

Balochistan is Pakistan's poorest and most neglected province and there have been several insurgencies by Baloch nationalist over six decades that have been brutally crushed by the military.

Whereas previously Baloch nationalists demanded greater autonomy within the federation of Pakistan, today the situation has worsened and many Baloch are demanding a separate country for themselves.

The danger is that amidst all of Pakistan's other problems - a crashing economy, political unrest and the Taleban insurgency in the north - the Baloch will come to feel more and more neglected and forgotten, thereby increasing the chances of more spectacular acts of terrorism.

Balochistan needs a political solution and quickly, but so far the government has failed to take remedial measures to improve the economic downturn and massive unemployment in the province or to talk to the dissidents.

In the meantime the fate of a UN official, who has spent several years helping poor Baloch people, hangs in the balance.