nimo_cn said:
I love your way of denying.

Yes, it is - that is why you are being asked some questions about it, which just cannot answer.

One does not have to prove that China is an autocratic and a cruel country.

Googling makes one sick with the numerous sites that shows what barbarians you all are!

Glitzy country and all that, but barbarians and inhuman at heart.

Don't believe me. Just Google - that is if it is not censored or not allowed!
Click to expand...

This is about India.

Want to talk about China? Open as many threads as you want.

I love your way of denying.

A Chinese video showing mongoloid guys speaking in a non Indian language...hard to believe rather. Nothing unexpected though, your simple Chinese mind can't distinguish propaganda from facts.

looks like man is trying to either set himself at blase or he is tying to throw petrol bomb which goes wrong and was burnt in the processes. this has happen several time even in New Delhi.

nimo_cn said:
I love your way of denying.

Denying?????? have you seen the video and it's quality????
Shinning democratic India, heard of Kundankulam protest's, Anna Hazare, heck add to it the separatists of Kashmir
Last edited: Mar 4, 2012

Could you be kind enough to let us know why foreigners and foreign media are prevented to report from areas whenever there is problems? Tibet, Sichuan, Greater Tibet, Inner Mongolia?

Even in our areas where there is insurgency, we are not afraid to let foreigners visit.

Read the thread where Israeli tourist are coming into Kashmir, even though Israel and the Muslim world are at loggerheads!

You better get better instructions from the Propaganda Ministry before flooding us with tripe!

If you don't, you will lose your 50 cents and be sent for re-education as a failure to the cause of the peasants of Communist China!

Nimo,
Posting Non Indian material and ranting basis on that, so does it is graphic not allowed here, read the forum rules, Infraction will be served if not able to follow simple rules, Keep this thread civilized..

This is about India.

Want to talk about China? Open as many threads as you want.
Click to expand...

I am afraid that this is not a Chinese Communist Forum, where you can hector.

Had you not posted a fake Chinese propaganda film I would not have posted the video on what exactly one would term as atrocity or made comments thereafter about Googling.

I would have appreciated if it were genuine footage, but a 'got up' Chinese drama purportedly being Indian SF in action is a bit thick and I believe so for the reasons mentioned in my posts where it was cleverly filmed and the language and uniform is not Indian!

I, personally, have no objections if you portray the errors of India, but I am afraid, I cannot let Chinese anti India propaganda and falsehood pass these portals as the truth!

I subscribe to the idea let 100 flowers bloom, but I would appreciate if real flowers bloom and not paper flowers masquerading as the Real McCoy!
Last edited: Mar 4, 2012

Ray said:
I would have appreciated if it were genuine footage, but a 'got up' Chinese drama purportedly being Indian SF in action is a bit thick and I believe so for the reasons mentioned in my posts where it was cleverly filmed and the language and uniform is not Indian!
Click to expand... 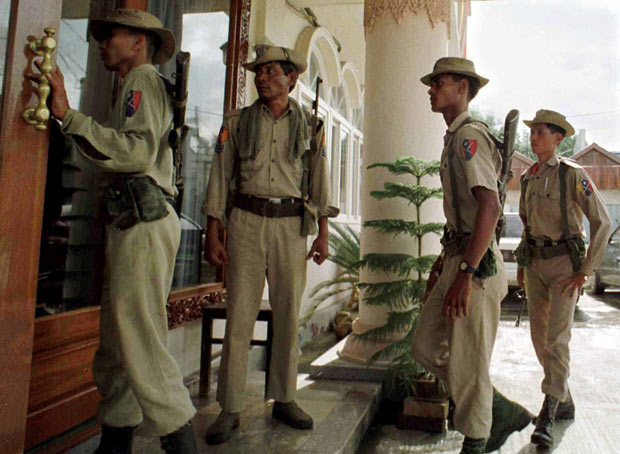 Can pass off as Indians except for the uniform and some fine details of the features! 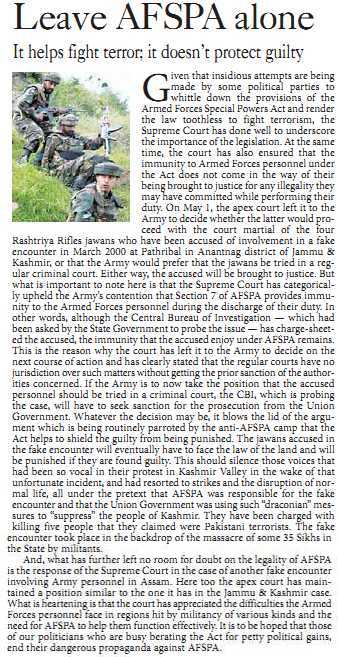 New Delhi, May 24 (PTI) The interlocutors' report on Jammu and Kashmir has recommended review of the controversial Armed Forces Special Powers Act (AFSPA) in the state and said the Defence Ministry needs to consider how to respond "positively" to the issue.
Click to expand...

Removing AFSPA from areas infested with terrorists/separatists only strengthens those scums. In my view, Maoists affected areas should be declared as disturbed areas, and Army called in. How long should we let the wound fester?

amitkriit said:
I am 99% sure that GOI will have to ignore the views of those Sonia-appointed intellectuals and go by the views of the general public. If AFSPA has to be withdrawn, it must be withdrawn from Manipur first.
Click to expand...

Whatever little peace remains in Manipur is because of AFSPA. There would be a civil war amongst Meiteis, Nagas and Kukis if AFSPA is revoked. 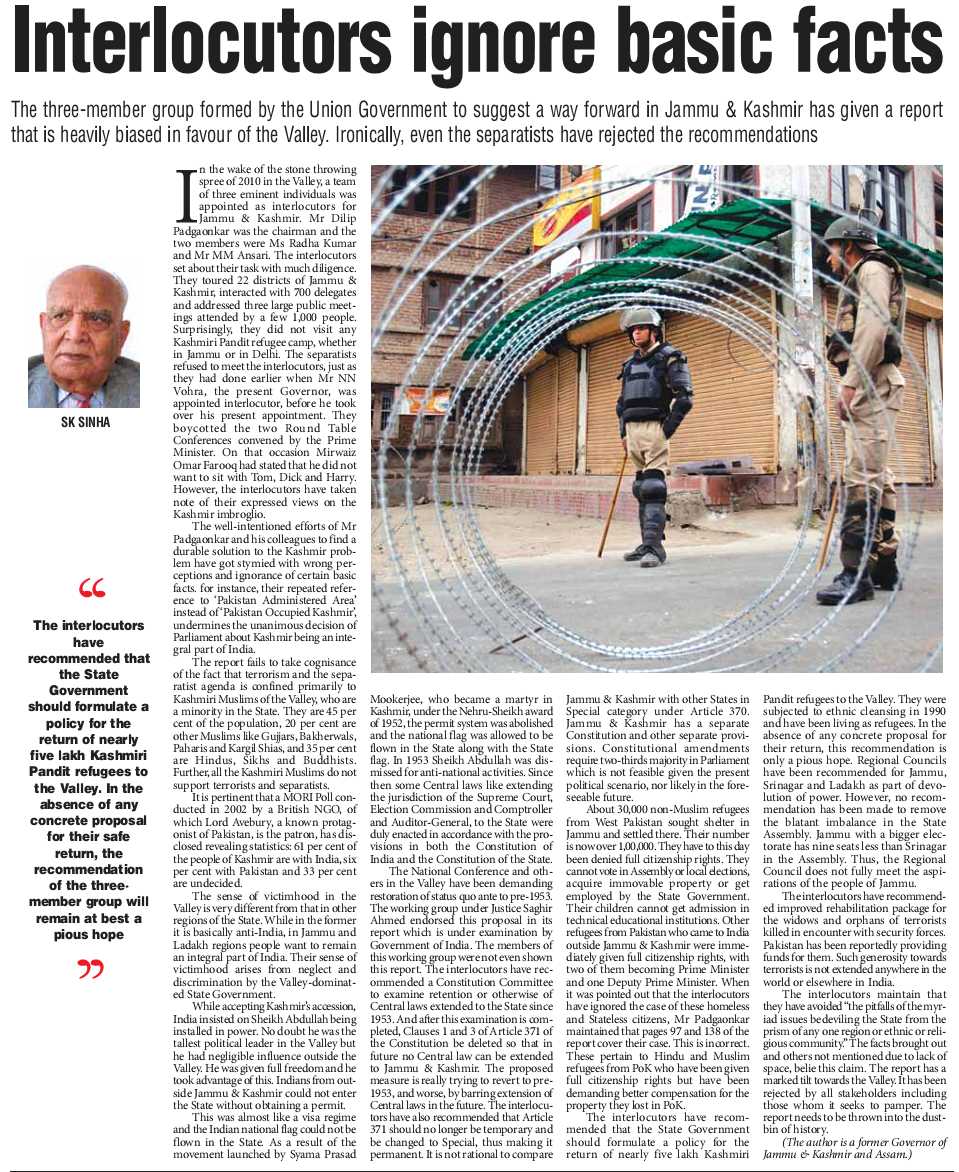 I am a firm believer in removing the AFSPA from all regions in a phased manner, I'm from one of the states that was once identified with insurgents like ULFA, not with the Kaziranga and tea, and I can say that due to army's presence and their rough tactics in the early years i.e. 1990s caused a lot of the people especially in upper assam to go hostile to the govt, maybe not in direct support but most definately in the form of moral and at times in the form of monetary support.
The situations have changed now but the fact remains that the people are still uneasy with army presence outside their barracks, I have friends from upper Assam in major national institutes who despite knowing the reality of the ground still harbour a sense of sympathy towards the Ulfa and a sense of anger towards the army, and I assume the situation in semi-educated regions to be worse.....

In any case it should be the responsibilty of the police to take care of CI ops,which I'm thankful is now the lead unit in any CI action in the NE. They are one of the reason why the public opinion has changed in favour of the govt. Of India. People in the NE dont take kindly to any outsider coming and imposing themselves over us. Even the Mughals and the Islamic empires could not even in their days of glory take over the NE.
A

The act should not be diluted. There re two main reasons for it:
(I) It provides legal cover to army personnel. In India , judiciary could be misused by using money. No army will work when its officers will be facing prosecution.
(2) The nature of terrorism is so complex in Jammu and Kashmir and North-Eastern states that the existing laws are unable to control the anti-national elements. Its not only about the terrorist but also the powerful anti-national elements who live within the system and help the terrorist .This law is for them. The civilian government is unable and inefficient to tackle the problem. Plus some officers of civilian government are in good rapport with the anti-national elements. In this condition , it becomes extremely important to provide autonomy to Indian army to do its work.
As far as the misuse is concerned , The only solution is a robust internal mechanism within the army. External interference would dilute the efficiency the performance of the army.
You must log in or register to reply here.
Similar threads
Gud Video On AFSPA Armed Forces Special Powers Act
Why is AFSPA necessary for India
Delhi has 'silently extended' harsh AFSPA act to my state:Arunachal CM
India rules out changes in AFSPA in Kashmir
Share:
Facebook Twitter Reddit WhatsApp Link