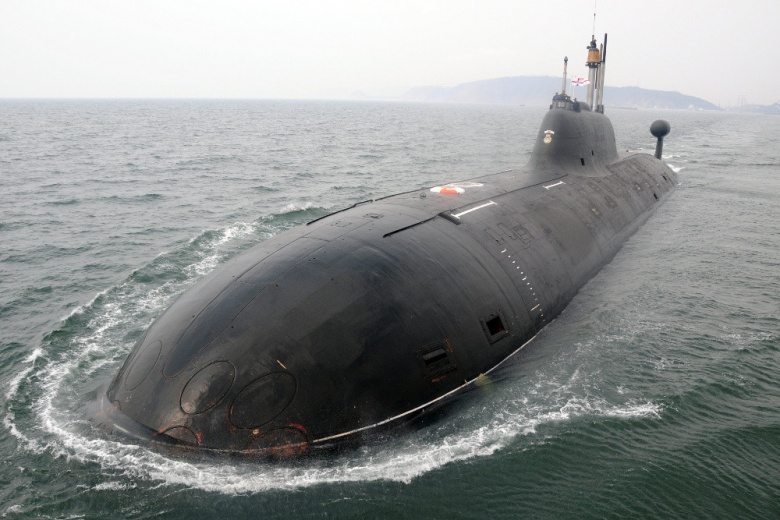 Editor’s Note​
With the broad considerations of the need for future-ready submarines and the vital need for indigenisation having been outlined in his previous article, the author discusses in more specific ways what may be done to actualise the suggested framework in quantity as well as quality. An important point he makes is the advantage of “spin-offs through a “Made in India” as opposed to “off-sets” via the “Make in India” approach. 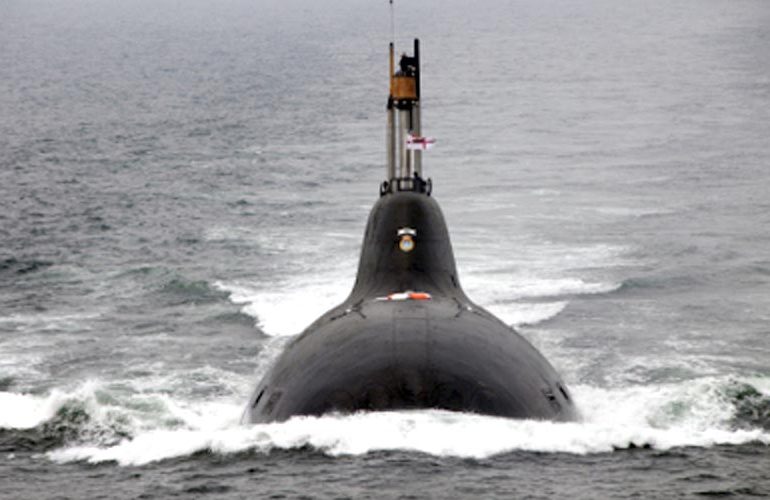 Image Courtesy: militaryfactory.com
Based on some valuable feedback and observations received from some commentators and veterans (some of them submariners themselves), this article elaborates on some approaches to increasing numbers and effectiveness of future programmes.

Design ‘Em& Build ‘Em: Leveraging Existing Foundations ​
Five points may be emphasised here:
Size Matters
The Indian Navy (IN) has already operated 3000t boats of the 877EKM class, so 4000t is not a great jump. It is not surprising that many new classes under construction or on the drawing board are around 4000t submerged displacement. Size helps thus:-
Options for 75 (I) as Make in India or Made in India?
One does not know if the proposed 75 (I) class boats are to be some foreign design to be licensed produced (in which case there would be limited indigenous content) or if a predominantly Indian design and build method is contemplated. If the former is opted for, true indigenisation will “recede” further into the future. If the latter is the preferred method, then there is almost certainly a need for an interim solution to have enough submarines available for conventional deterrence and war-fighting.
A simple scan of the developments underway would show up a few countries that are building larger SSKs for themselves or their customers. In alphabetical order, Germany, France, Japan, Korea (ROK) come to mind. Quite possibly, Russia and Sweden could also come up with designs that are similar to what the IN’s future-ready submarines ought to be capable of.
Rhetorically, where would continued foreign- dependence leave deeper national interests that, inter alia, depend on a very high degree of self- reliance in defence hardware?
Made in India? 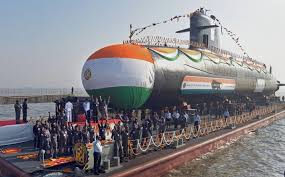 Image Courtesy: India TV
If the second option is chosen, a certain degree of foreign collaboration and partnership would be necessary and unavoidable. However, it is here that leveraging existing and future self-reliance of nuclear boat- building would be the game-changer for SSKs.
In areas of large electric propulsion motors, newer versions of batteries, especially Lithium-ion (LIB), enhancements in reliability and safety of AIP (but with a bias for an indigenous version) foreign collaboration could be sought. In addition, the diesel generators required for battery charging are also undergoing some significant technological changes for which long-term collaboration with foreign partners will probably be necessary.
This suggestion is by no means unusual. Korea and Japan continue some important partnerships acknowledging IPR, but also leveraging their own expertise towards major design improvements with their own rights to them. As a student of the indigenisation efforts made by the Imperial Japanese Navy beginning about 1880, this writer acknowledges that Kawasaki’s (now KHI) partnership with MAN Diesels began in 1911 and continues a century later.
This thrust for indigenisation with partial foreign assistance, when married to major Indian capabilities, creates benefits in other areas that companies can and must profit from.LIBs are a sunrise sector across future usage areas especially in electric vehicles, seagoing vessels, even airplanes. Niti Aayog has already highlighted the need for not only self- sufficiency, but tremendous export potential to be exploited. Are we to cede even this space to China which already has a head start? In submarine usage, are we to over-state their current high costs to future reduction and quality gains? Let us instead think of the operational and tactical synergistic advantages that we may get from quicker charging, longer- life LIBs in tandem with better diesels and more efficient electric motors. Talking about electric motors, why not create spin-offs for other sectors where electric motor technologies that go into submarines will find increased application? Why not all this and more?
Vigorous indigenisation of conventional submarines has another spin-off akin to aircraft firms that now manufacture high-performance military unmanned aerial vehicles (UAV). The same companies that make submarines could also be aggregators of UUVs. Neither should the possibility that successes in further size reduction of nuclear reactors enables some class of SSNs of the same size as SSKs. Perhaps that would be “payback time” from conventional to nuclear building lines! None of the above is beyond plausibility, do-ability, necessity and desirability.
In a very recent article, a Singaporean analyst has propounded that the IN should follow the Korean model which suggests an evolving connection between the P-75 (i.e., the Scorpene/ Kalvari class) to lead to a “Super Kalvari” as P-75(I). This version would have increased indigenous systems, AIP and perhaps a VLS. Thereafter, Mr Alan Kuriako suggests that India should make a larger P-76 with the Naval Group continuing to be design adviser as could be the TKMS group for the KSS- III Korean SSK.
While the analogy seems reasonable, it has some issues that the IN should think about. The main drawback is that it does not leverage the nuclear submarine programme at all and may perpetuate the stove-pipe approach. Second, we must remain pessimistic about such an approach to indigenisation, because it lacks adequate fidelity in true parameters against which indigenisation ought to be measured.
Third, the model suggested would be easier on logistics but these benefits are not likely to be as large in the SSBN/ SSN- SSK cooperative lines. The logistics would be also more Indian than in Kuriako’s model. But, either way the logistics diversity, whatever be the reasons, that plagues the Navy and Air Force should not be allowed to worsen by having diverse buys every few years.
Fourth, like the KSS- III, a future P-76 at 4000t could be a fairly different submarine. Therefore, why not build it as 75 (I) itself? Fifth, by putting in this effort, the spin-offs stated earlier for other applications are likely to be much higher.
“Spin-offs” v/s Off-sets
This brings the author to make the following statement: The advantages of“spin-offs” via deeper indigenisation certainly would be greater than the advantages of “off-sets” via import- dependent “Make in India” approaches in almost any field of defence hardware. The choices are always up to us.
Bridging the Gap

Image Courtesy: Indian Defense News
The six P-75 submarines, along with the existing ageing ones would be an inadequate force in terms of numbers into the mid-term when the IN’s choices of what becomes the 75(I), puts to sea. Therefore, it makes sense to continue to have about three- four more of the P-75 boats to bridge the war-fighting gap in the submarine arm. However, to make them more future- ready, these must be built with AIP and more advanced sensors. It is probably difficult to have a VLS module as well, because with the increased size of the boat with AIP plus VLS, the propulsion plant may also need an upgrade. All told, the difficulties of both these upgrades together might not be worth the pay-off. If this be considered, the builder, MDL, would be able to keep its capital investment spread and its skills preserved as a future P-75 (I) and beyond partner.
In sum, a better course of action for India might be to leverage the nuclear and conventional lines; spread them as necessary across companies, public and private; and look for spin-offs through indigenisation.
In the next 15-20 years, there may come a time and need for looking at some type of newer submarine class that could then become the P-76 and these boats could take the Navy into the final decades of the 21st century and perhaps into the 22nd millennium as well.
http://bharatshakti.in/actualising-...g-indian-submarines-for-the-next-fifty-years/

Thanks for the tag @lcafanboy

When Author suggests opinion of JV or collaborations with foreign vendors it defeats his on written piece on Indigenising.

Rather actualization, which we already have, we need to work out institutionalizing the art of producing it on industrial scale.

Research and Development is long a Laborious process, Absorbing technology is also a challenge. Both get wasted as it is a race against the rest, read Time.

The other challenge is sustainable Skill; people leave or the even die before a product is delivered. And when you aspire to set a goal for next 50 years there has to an independent institute that conceives this idea and set a hierarchy that continue to pass on skill and goals to next generation.

50 years is a long time .
10 years is correct time frame. We should be like Japan, every 20 years we commission a new class of submarines

India should concentrate and put more human scientific resources on SSK & SSBN development ... The problem with India is the numbers... India has less number of Submarines for aggressive patrolling and war fighting across IOR...

Indian need at least TWO simultaneous production lines for SSK & SSBN... HSL and a new private player either PIPAVAV or L&T. L&T is already involved in the current Arihant development...

As for the Diesel Submarines I would suggest scraping the 75(I) and go for the bigger Baraccuda subs with the existing Mazagon production line [ there is a new second prod line added there ]... we should also have a second private player i.e. PIPAVAV or L&T production line.

India need four submarines per year for next 10 years starting 2020 ...
You must log in or register to reply here.
Similar threads
These levelsthe framework are in a state of harmony a
Australian Minister: Framework this year for uranium supply to India
UK Considers Adapting FMS Framework for its Exports
U.S. Army increases scope of KONGSBERG CROWS II framework agreement
Share:
Facebook Twitter Reddit WhatsApp Link